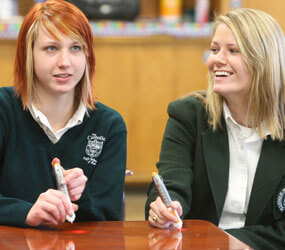 High schools and elementary schools in the Archdiocese of Baltimore are pushing beyond technological limits, discovering that that classroom lessons are mobile and clunky textbooks might be a thing of the past.

Such is the case with The Catholic High School of Baltimore, where students are being introduced to digital pens that communicate throughout classrooms and the world’s first dualbook e-reader.

Amanda Trapani, the school’s network support director, said much has changed at Catholic High since she graduated there in 2000.

“It’s a totally different feel,” Trapani said. “We never had laptops 10 years ago and the computers looked ancient.”

The new AVerPen technology, used throughout the all-girls school, was piloted with English teachers Karen Mitchell and Sharon Johnston. A student sitting at her desk can use a pen, connected to software on an instructor’s computer, to write on a screen in front of the class. Teachers are equipped with the pens as well.

Technology coordinator Dianne Kestler, a member of Catholic High’s Class of 1980, said “the pen creates mobile interaction. It communicates with the software and the teacher can move about the room. It brings everyone into the lesson. It moves the teacher form having to be up in the front of the classroom. She can control everything with the pen.”

Mitchell, a member of the school’s class of 1992, said “It’s like a PowerPoint, except more interactive.”

Students using the pens for the first time were blown away.

“I wish it was in a lot of my classes,” senior Paige Lauenstein said. “I would be begging for it.”

Thanks to a grant from The Marion I. & Henry J. Knott Foundation, Catholic High is also incorporating the enTourage eDGe dualbook E-Reader, which can serve as a tablet, notepad and audio/video recorder.

Weighing about two pounds and easy foldable, the Google-powered technology could have all textbooks downloaded onto it in the future. Many textbook companies haven’t uploaded high school materials for e-readers yet. Catholic High administrators think that will have to change.

“A textbook in a classroom is simply a tool, not the curriculum,” said principal Madelyn Ball. “We’re basically telling the publisher, ‘We don’t have to have your textbook.’ We’re hoping they’re going to respond quickly.”

Students got their first look at it in mid-January as well. Senior Amanda Markowski, who works for a major manufacturer’s technology store, said the eDGe dualbook is unique.

“We’re far ahead of actual retail,” Markowski said. “It’s amazing (that) an all-girls high school has the ability to move forward and get all this technology and incorporate it with what we’re learning.”

Elementary schools, such as Resurrection-St. Paul School in Ellicott City, have made technology a top priority to enhance the learning experience as well.

“Schools can get the stuff,” said principal Karen Murphy, “but if it just sits there and there’s no professional development and there’s no environment where it’s embraced as part of their vision moving forward, then it’s really a waste of money.”

On a recent morning at the school, students and teachers employed a wide array of technology in classroom after classroom.

Second-graders figured out math problems at their desks before using electronic “clickers” to punch in their answers that were displayed digitally on a whiteboard. Pre-kindergarten students counted aloud as their teacher tapped on electronic square boxes that turned bright red. Other students manipulated geometrical shapes on their computer screens in the computer lab.

A few weeks earlier, students used computers to create collages of images and digital stories focused on the life of Pope John Paul II and his relationship with the Jewish community. They also blogged about it. The class materials were posted to a class Wiki (website), enabling students to access materials in and out of the school building.

“It’s a way to make learning much more student-centered,” said Alex Will, a third-grade teacher at the school. “It increases the level of participation and it’s a nice way to grab their attention and hold it.”

Through a program called PowerSchool, teachers keep electronic records of student grades and can easily communicate with parents via e-mail. The school has also started a pilot program using iPads, with select teachers experimenting with education applications. The teachers will soon be blogging about their experience on the school’s website.

Murphy predicted that in about five years, textbooks will become obsolete at Resurrection-St. Paul. Students will likely have all their reading material stored on one lightweight electronic reader such as a Kindle or Nook, she said.

“That is the direction education is going,” she said. “We are on the front of the wave and the challenge is that the textbook companies aren’t there quite yet. They are trying to figure out how to do it.”

Visit www.CatholicReview.org/palmerblog for a video report on technology at Catholic High and Resurrection-St. Paul.