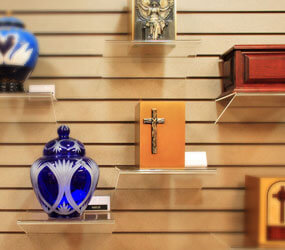 WASHINGTON – While cremation is not prohibited unless it is chosen for reasons “contrary to Christian teaching,” the Catholic Church prefers that the body of a deceased person be buried in accord with church custom, according to statements issued by two U.S. archdioceses.

Cardinal Justin Rigali of Philadelphia and Archbishop Michael J. Sheehan of Santa Fe, N.M., said that even when cremation is chosen, the cremated remains of a deceased individual must be treated with respect and integrity. Cremated remains only may be buried in a cemetery or entombed in a mausoleum or columbarium, they said.

The prelates issued their statements recently to clarify church teaching on cremation and proper burial of the dead.

Both prelates said scattering cremated remains is not permitted under church teaching.

“Especially to be condemned are the practices of scattering the ashes, enclosing them in jewelry, dividing them among relatives as keepsakes or doing other bizarre things with them,” Archbishop Sheehan wrote in an All Souls’ Day statement. “Such practices do not give honor to the body and, indirectly, are an affront to our belief in the resurrection of the dead.”

Keeping ashes at home so that family members “may feel close” to their loved ones “shows a lack of faith in the communion of saints, by which we are spiritually united to the departed, in a way far more marvelous than keeping their remains on a shelf in our house,” Archbishop Sheehan said.

Cardinal Rigali said burial at sea is permitted, but cremated remains must be placed in a solid and durable container and not scattered.

Norms governing cremation in Philadelphia took effect Nov. 1, All Saints’ Day, and said that burial of the human body recalls the manner of the entombment of Christ even though cremation is allowed.

The norms state it is preferred that remains be cremated after a funeral Mass. The norms also require that the length of time between a funeral liturgy and the burial of cremated remains not to exceed 30 days.

In cases where remains are cremated and buried prior to a funeral liturgy, the rite is to be adapted according to the Order of Christian Funerals, the norms said. For example, the rite of final commendation and rite of committal would be omitted because they would have already occurred at the burial.

Father G. Dennis Gill, director of the Philadelphia archdiocesan Office for Worship, explained to The Catholic Standard & Times, the archdiocesan newspaper, that most of the norms are not unique but are spelled out in church law or in liturgical books.

The new Code of Canon Law issued in 1983 said the church “earnestly recommends” the custom of bodily interment but does not prohibit cremation unless it is done for reasons “contrary to Christian teaching.”

Since 1997, the U.S. bishops have had permission, in cases where the body has been cremated, to allow the cremated remains to be present at the funeral Mass or liturgy in their dioceses if they judged it pastorally appropriate.

According to The Catholic Standard & Times, a recent survey showed that about 21 percent of Catholics choose cremation.

In Santa Fe, Archbishop Sheehan urged pastors to share church teaching on cremation and burial with faithful in the pews. He asked the priests “to do all in their power to see that each Catholic receives the funeral rites of the church as they deserve as baptized Christians.”

“Let us not be misled by the atmosphere of paganism around us, which rejects the existence of the soul, the sacredness of the body, the mercy of the redemption and the eternal life with God in heaven. Rather, let us render the debt of love we owe the dead in frequent prayer for their eternal rest and let our funeral celebrations show to the entire world that we believe ‘in the resurrection of the dead and the life everlasting,’ won for us by the death and resurrection of our Lord Jesus Christ,” Archbishop Sheehan said.