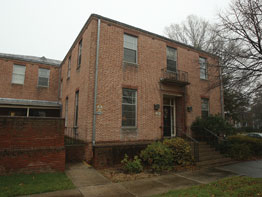 In a move to provide more support to men considering priestly vocations, the Archdiocese of Baltimore is transforming the second floor of St. Matthew’s rectory in Northwood into a house of discernment.

The discernment house will open in January with at least six seminarians, including three from South America – just three short of the house’s capacity. All have already undergone required archdiocesan background screenings, Father Francik said.

Father Patrick Besel, associate pastor of the Catholic Churches of Western Allegany and Northern Garrett counties, will serve as director of the discernment house. An associate director will be named in the near future, Father Francik said.

In addition to his duties at the formation house, Father Besel will succeed Andrew Veveiros as associate vocation director for the archdiocese.

Father Francik and Father Besel believe the house of discernment will provide a place where seminarians can feel supported in the discernment process.

“It provides a great sense of community,” Father Francik said. “Guys will be able to talk to one another and they’ll do some pastoral work in parishes.”

Residents will partake in daily morning prayer, Mass and evening prayer. They will also eat dinner together, he said.

Father Besel, a former counselor who holds a master’s degree in Christian spirituality with a certificate in spiritual direction from Creighton University in Omaha, Neb., said he is looking forward to working with seminarians. He believes his parish experience in Western Maryland will be an asset in his new role.

“I can share with the guys what the future of the priesthood might look like with ministry in multiple parishes,” said Father Besel, who grew up in St. Bernadette parish in Severn and was ordained in 2006.

In working with residents of the discernment house, Father Besel said he plans to emphasize the fundamentals of priesthood like prayer and sacramental life and answer questions about the religious life.

During his own discernment process, Father Besel said he was encouraged by other priests. He hopes to provide that same kind of encouragement to seminarians, he said.

Father Francik expects the house of discernment to become a focal point for promoting religious vocations. Evening prayer, dinners and formal programs for young men considering religious life will be offered, he said.

The archdiocese has received support from Serra International, the Knights and Ladies of Columbus and private donors in establishing the house of discernment. Donations of food, towels, sheets and other supplies are now being accepted.

“I knew people would be supportive,” Father Francik said, “but I’ve been amazed at the amount of enthusiasm for this project.”

The archdiocese is still considering a name for the house of discernment. Send suggestions to gfrancik@archbalt.org.