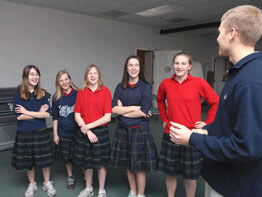 MILWAUKEE – In an age of complex, high-speed technology, the Milwaukee Archdiocese’s Vocations Office has turned to a method used in the time of Christ to help young Catholics determine God’s calling for them.

“They went out two by two, just like the disciples,” said Father James Lobacz, archdiocesan vocations director, about members of the Vocation Ministers of the Milwaukee Archdiocese.

Last fall they visited each of the archdiocese’s 13 high schools to discuss vocations education and programming at each school. The initiative is called “Give God a Chance!”

“The goal of the whole effort is to establish a healthy, creative relationship with the high schools,” he told the Catholic Herald, the archdiocesan newspaper.

A letter to each of the schools from Milwaukee Archbishop Timothy M. Dolan explained that the project, a collaborative effort of the Vocations Office and the vocation ministers group, “will result in a deepening appreciation of God’s voice calling your students to marriage, priesthood, religious life, the diaconate or professional church ministry.”

The Vocations Office hopes to glean from assessments administered by the vocation ministers better ways to serve the students’ vocations needs.

“What is it they want, and what is it we need to change,” said Father Lobacz. “If we don’t have it, we’ll get it.”

About half the assessments are in and Father Lobacz reported that the high schools were “very open and very creative about what they might want to take from this.”

Father Lobacz said the idea for approaching each high school individually came from the vocation ministers group, which includes vocations directors from 30 religious orders of women and men who provide ministry in various places throughout the archdiocese.

The vocation directors “are doing all the legwork. I’m the wheels and pulleys and gears, doing the mechanicals,” he said.

Dominican Sister Karen Vollmer, a member of the vocation ministers organization, is taking part in the assessment project.

Sister Karen visited St. Catherine High School in Racine. As a former teacher and board member at the school, she felt most comfortable returning.

“The best part is that we were so well received,” she said.

During Vocations Week, Jan. 8-12, Sister Karen and another vocations director talked to each religion class at St. Catherine.

“We’ll go in and tell our own stories and how God calls each of us to single life, married life or community life,” said Sister Karen. She added that high school is the best time to discuss vocations because students are “discovering their talents and making decisions about their futures.”

Years ago, when priests and nuns taught and ministered daily in the schools, the need for vocations programs in the schools was not as great as it is today.

“They were a presence in the schools,” said Sister Karen.

The vocation ministers’ program is intended to re-establish that presence.

Father Lobacz said that each school will have different needs for vocations programs. One size does not fit all. “We have to respect the uniqueness of the pastoral settings,” he said.

After meeting with principals, religion teachers and campus ministers at the schools, the vocations directors are completing the vocations needs assessments. This is the first phase of the project, and it is expected to provide a full picture of the state of vocations education at each of the schools.

The schools’ current “religion curriculum, retreat programs, mentoring situations and service projects might all relate to the goals of ‘Give God a Chance!’” said Father Lobacz in his letter to the schools.

After the assessments have been completed and reviewed, the vocations ministers and the archdiocese’s Vocations Office will undertake the second phase of the process – designing vocations programs for each of the schools.

The third phase of “Give God a Chance!” is the implementation of the programs, most likely to begin this fall.