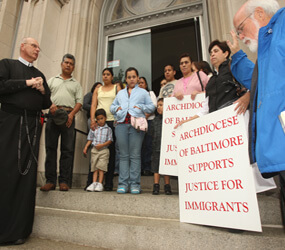 Saying they were following in the footsteps of civil rights activists Dr. Martin Luther King Jr. and Dorothy Day, a contingent from the Archdiocese of Baltimore traveled to Washington to pray for immigration reform.

Before the interfaith prayer vigil in the nation’s capital June 17, a rally was held at St. Patrick’s Church in Fells Point. The pastor of the Catholic Community of St. Michael and St. Patrick, Redemptorist Father Robert Wojtek, was joined by Father Joseph L. Muth Jr., pastor of St. Matthew in Northwood, in speaking against perceived injustices.

“We’re here today because we know we must unite our voices to the majority of Americans who are clamoring for the reform of an outdated, broken and unjust immigration system in this country,” Father Wojtek said.

Outside the church, chants of “Si Se Puede” rang out from members of the recently-formed Archdiocese of Baltimore Immigration Coalition. The phrase is Spanish for “Yes, it can be done,” inspired by President Obama’s campaign slogan, “Yes we can.”

The coalition was recently formed by Archbishop Edwin F. O’Brien.

Supporters held signs that said “The Archdiocese of Baltimore supports justice for immigrants.”

“We do not stand here as a political party, but as a people of faith,” Father Muth said. “We commit ourselves to prayer and action that will help bring about just and lasting dignity for immigrants in Baltimore and across the United States of America.”

Father Wojtek said the vast majority of his parish’s Masses are celebrated in Spanish. He estimated 90 percent of his parishioners are Hispanic.

The Catholic Church in Baltimore has long supported immigrants in the country, Father Muth said, noting that stories were legendary of priests meeting European newcomers at the Port of Baltimore before escorting them to local parishes.

The president was scheduled to meet with the Congressional Hispanic Caucus on the day of the vigil in Washington. He was unable to make the meeting.

At the annual spring meeting of the U.S. Conference of Catholic Bishops June 18, Cardinal Francis E. George, president of the conference, also called for Congress to enact comprehensive immigration reform before the end of 2009.

Immigration reform has been one of the most controversial U.S. political topics of the last five years. The country’s leaders have wrangled over what to do with undocumented immigrants, particularly from Mexico.

Despite immigration’s hot button status, it did not play a major role in the most recent presidential election.

The Catholic Church has stressed compassion for people who have come to the U.S. without documentation. Father Muth acknowledged it is “a touchy issue.”

“We haven’t said it’s OK for them to cross the border illegally,” Father Muth said, “but if they do cross the board illegally, we are there to help them get their status adjusted and move toward citizenship or to become legal permanent citizens.”

He said St. Matthew has people from 42 different countries in the parish.

Lisa O’Reilly, a white Irish immigrant, is now the youth minister at St. Mary of the Assumption, Govans. She said it took her three months to fill out the necessary paperwork to become a United States citizen despite speaking English. She said expenses alone are overbearing for the poor entering the country.

“I’m here today to speak on behalf of people who don’t look like me,” O’Reilly said. “Why is it OK for me to be here and other people aren’t? Now is the time to reform this broken system that forces people to be illegal.”