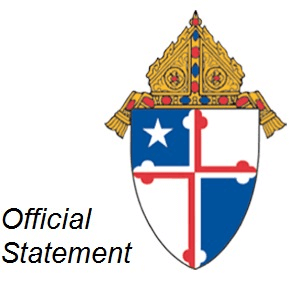 The Archdiocese of Baltimore released the following statement Feb. 12.

The Archdiocese of Baltimore has learned of an allegation of sexual abuse of a minor against Father Jorge Antonio Velez-Lopez, T.C., 60, a member of the religious order known as the Tertiary Capuchins, who last served in the archdiocese in 2010. The alleged abuse began approximately in 2007 while Father Velez was assigned to St. John the Evangelist Parish in Columbia. The alleged victim was a parishioner at  Resurrection of Lord in Laurel.

The allegation was immediately reported to civil authorities in Howard County, to the superior of Father Velez’s religious order, and to the Diocese of Alexandria, La., where Father Velez has most recently been serving.

Father Velez began working in the Archdiocese of Baltimore in July 2002 and served at St. John from 2003 to 2010. During this time he also ministered to members of the Spanish-speaking community in several other parishes, including Church of the Resurrection in Laurel, Holy Trinity in Glen Burnie, St. John the Evangelist Church in Frederick, Sacred Heart Church in Glyndon, and St. Joseph Church in Cockeysville

The Archdiocese of Baltimore is committed to protecting children and helping to heal victims of abuse. We urge anyone who has any knowledge of any child sexual abuse to come forward, and to report it immediately to civil authorities. If clergy or other church personnel are suspected of committing the abuse, we ask that you also call the Archdiocesan Office of Child and Youth Protection Hotline at 1-866-417-7469. If you have any other information relevant to this matter, please contact the Archdiocese Office of Child and Youth Protection at 410-547-5599.