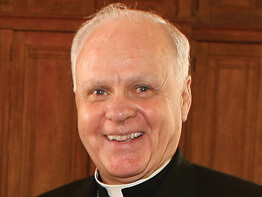 The church marks momentous occasions, such as the installation of the new archbishop of Baltimore, with special liturgical celebrations.
Carrying out the liturgy and ceremony requires effort on the part of many and attention to the smallest of details.

“It’s a complicated liturgy, and we want to make sure it’s right,” says Deacon Ray T. Moreau, the chief administrative officer at the Cathedral of Mary Our Queen, Homeland, where the installation of Archbishop Edwin F. O’Brien will take place on Oct. 1. “We want to make sure it’s befitting to the event and the participants and certainly to the glory of God.”

To stage such a celebration has “a lot of moving parts,” Deacon Moreau says, “but all of it is focused on the spiritual significance of having a new shepherd for the Archdiocese of Baltimore.”

The night before the installation, Archbishop O’Brien will join about 400 people for a Vespers Service at the Basilica of the National Shrine of the Assumption of the Blessed Virgin Mary, Baltimore. The installation begins the next day when the rector of the cathedral meets the archbishop in the vestibule of the cathedral and symbolically welcomes him.

Then Archbishop O’Brien is dressed in vestments, and the procession, expected to last nearly half an hour, begins at 1:30 p.m. As of press time, 392 priests, 59 deacons, 27 seminarians and 71 cardinals, bishops and archbishops are planning to attend, as well as 1,618 other representatives from the archdiocese.

The clergy are expected to take up two-thirds of the seating on the left side of the cathedral. As they sit, the archbishop’s chair on the left side of the altar remains symbolically empty as Archbishop O’Brien first sits in front of the main altar. Once he ceremonially accepts the position, he will be escorted to the archbishop’s chair by Archbishop Pietro Sambi, apostolic nuncio to the U.S., and Cardinal William H. Keeler.

Monsignor Robert Jaskot, chancellor for the archdiocese, said that his office has been inundated with requests for tickets, “but it shows people want to be supportive of the archbishop,” he said.

All of the archdiocese’s priests and deacons were invited, and each parish was given two additional tickets. Dignitaries, representatives from other Catholic ministries, representatives from other faiths, media, and family and military chaplains invited by Archbishop O’Brien will fill the cathedral to capacity – 1,875 people seated. Those seated in the side chapels will have TV monitors to see the installation. EWTN will also broadcast the installation live and local TV stations will be there, too.

“But this is unique,” Monsignor Jaskot said. “There are so many details and it’s important to make sure everyone is properly prepared.” After all, he notes, the event is also a chance for the archbishop to meet representatives from throughout the archdiocese.

The staff at the cathedral are honored and moved to be involved, said Deacon Moreau.

“Parking is going to be very crowded,” he said, adding that police will be on hand to direct traffic and buses will be available for guests from The Marriott Hunt Valley Hotel and the Radisson Hotel at Cross Keys.

As part of the celebration, Dr. Ronald J. Valenti, superintendent of schools for the archdiocese, announced that all Catholic schools will close on Oct. 1.

“It’s a long-standing tradition,” he said. “It’s a celebratory event; it’s a momentous event and it’s historical – the last time we did it was 18 years ago. It’s an event that warrants a certain amount of affirmation.”

In July, Pope Benedict XVI asked Archbishop O’Brien to succeed Cardinal William H. Keeler, whose resignation was accepted at the age of 76 after 18 years leading the Archdiocese of Baltimore. (See the B section to read more about Archbishop O’Brien.)

Once the initial celebration is over, he’ll begin his duties serving an archdiocese with more than half a million Catholics. His schedule promises to be grueling: On Oct. 4 he’ll start with a four-day swing through the western part of the archdiocese that includes tours, meetings or lunches at some 16 parishes in western Maryland.