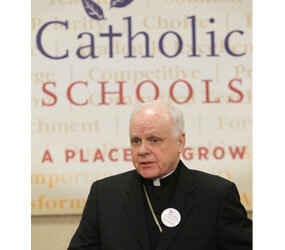 Archbishop Edwin F. O’Brien officially announced the consolidation of 13 schools in the Archdiocese of Baltimore March 4, while saying he remained “whole-heartedly committed to Catholic education in Baltimore – the birthplace of Catholic schools some 200 years ago.”

The archbishop made the announcement at the Catholic Center, the archdiocese’s headquarters.

The consolidated schools are in Baltimore County and Baltimore City, where enrollment has been in sharp decline during the last decade.

In Baltimore County, Ascension in Halethorpe, St. Clare in Essex and Holy Family in Randallstown will not reopen.

The high school that will not reopen in the fall is The Cardinal Gibbons School, in Baltimore. The 297 students at the all-boys school will be encouraged to attend local Catholic high schools

“We are beginning a new era of Catholic education here in the Archdiocese of Baltimore, ushered in by unprecedented financial challenges but also by tremendous opportunity,” Archbishop O’Brien said.

Monsignor Robert L. Hartnett, executive director for the Office of Schools Planning, said the receiving schools for Cardinal Gibbons are currently being determined.

Monsignor Hartnett unveiled a series of proposed plans that the archbishop hopes will make the schools more competitive with public institutions.

“I think what we’ve heard over the years is basically that we teach very well to the middle,” Monsignor Hartnett said. “Parents have often raised concerns about whether we sufficiently address the needs of our gifted and talented students and students with learning challenges.

“There’s never been a programmatic approach to address those concerns.”

Mark Pacione, associate director of the Office of Schools Planning, said every student in one of the consolidated schools is being told that there is a place for them in receiving schools. The archdiocese will call and e-mail their families to educate them about potential Catholic school destinations and provide contact information.

“If by some miracle, every parent said ‘we’re going to Catholic school next year,’ I’m confident we have a place for them within a reasonable distance,” Pacione said. “We want them.”

For a detailed analysis of the consolidation plan, visit www.CatholicReview.org/schools