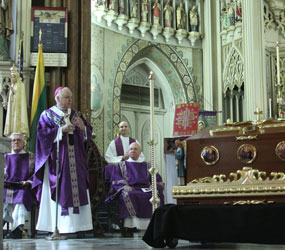 In the same Baltimore church where St. John Neumann once served as pastor and was consecrated the fourth bishop of Philadelphia, hundreds of Catholics gathered March 27 at the Shrine of St. Alphonsus to celebrate the saint’s 200th birthday.

At the end of the liturgy, churchgoers prayerfully venerated a special relic of the Bohemian-born saint – gently kissing or touching an ornate reliquary that housed a piece of St. John Neumann’s vertebrae.

Irene Mann, St. Alphonsus’s director of development, called it “wonderful” to have the opportunity to be so close to the saint.

Archbishop Edwin F. O’Brien celebrated the Mass one day before St. John’s actual birthday, calling the occasion “a significant moment for all of us.” The archbishop sat in the exact chair that was used 159 years earlier during St. John Neumann’s episcopal consecration on the saint’s 41st birthday.

In his homily, Redemptorist Father Patrick Woods, former provincial leader of the Redemptorists, said St. John was a very ordinary man who did extraordinary things.

St. John was ordained for the Archdiocese of New York in 1836 before joining the Redemptorists in 1842 – serving as a missionary to German immigrants. He was named pastor of St. Alphonsus in 1842, and also was superior of his Baltimore-based religious community.

Father Woods recalled that St. John was especially interested in reaching out to women religious. He helped establish the School Sisters of Notre Dame in Baltimore and was instrumental in having the sisters staff schools at St. Alphonsus, St. James and St. Michael. St. John also aided in the founding of the Sisters of the Third Order of St. Francis, and he supported the Baltimore-based Oblate Sisters of Providence.

Father Woods quoted from a note St. John had written about his time as Redemptorist superior in which St. John said he believed his greatest accomplishment was “not so much in the work I did for my own community, but in the way I was able to help women religious – so vital to the life of the Church in America.”

As bishop, St. John was well-known for his humility, his promotion of eucharistic adoration, his outreach to immigrants and his support for Catholic schools.

Father Woods noted that when St. John’s sainthood cause was first investigated, some wondered whether he was too ordinary to be a saint. St. John did not work great miracles, found a religious order, write great books or die a martyr, Father Woods said.

The homilist quoted Pope Benedict XV – the reigning pontiff when St. John’s sainthood cause was explored – who said “no one any longer should doubt that the simplicity of work performed by John Neumann did not prevent him from a marvelous example.”

It was the saint’s very simplicity, the pope said, that made St. John an example of faith “not difficult for us to imitate.” St. John would be canonized by Pope Paul VI in 1977.

“These two saints of God are my inspiration and my life,” Monsignor Bastress said.