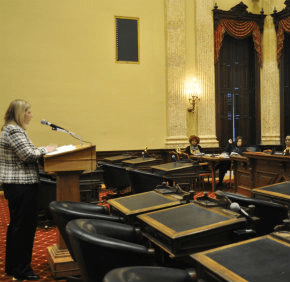 By Maria Wiering
mwiering@CatholicReview.org
A representative of the Archdiocese of Baltimore voiced concerns Feb. 26 at a Baltimore City Council hearing about a controversial bill that could make it more difficult for employers to know if job applicants have been accused or convicted of sexual abuse.
Known as “Ban the Box,” City Council Bill 13-0301 primarily seeks to remove barriers to employment for job seekers with criminal histories. The ordinance would prohibit a hiring employer from conducting a criminal background check or inquiring about an applicant’s criminal history before extending a “conditional offer of employment.” The prohibition includes any checkbox a job seeker must mark on a job application if he or she has a criminal history.
The bill was heard before the council’s Judiciary and Legislative Investigations Committee.
Alison D’Alessandro, director of the archdiocese’s Office of Child and Youth Protection, testified that, as written, the measure would prohibit employers of organizations with vulnerable populations – children, youth, adults with disabilities and the elderly – from asking applicants whether they have been accused of sexual abuse. It would also prohibit employers from taking an applicant’s criminal history into consideration after a background check is completed.
The measure could also prohibit an employer from firing a person accused of child abuse but not convicted, D’Alessandro said.
“I personally know of many examples of individuals who have been credibly accused of child abuse, the matter has been reported to civil authorities, but no conviction has resulted,” she wrote in a letter accompanying her testimony. “For many years, it has been the wise policy of the archdiocese that if we believe a person has abused a child, he will not be permitted to work in the archdiocese regardless of whether he has been convicted.”
While child abuse is the main example, D’Alessandro said in the letter that it is also in the interest of the archdiocese not to hire applicants who may have been credibly accused, but not convicted, of embezzlement.
The archdiocese opposes the bill in its current form, unless it is amended to appease its concerns. It supports the measure’s general aim.
“I feel so strongly about this,” D’Alessandro told the Catholic Review about her appeal for the bill to be amended.
Maryland’s State Council on Child Abuse and Neglect, the Maryland Partnership to Prevent Child Sexual Abuse and the Baltimore Child Abuse Center shared similar concerns with the council. They echoed the concerns of other organizations, that, while not opposed to the bill, cautioned that its wording is too vague.
Councilmember Nick Mosby, who represents District 7, introduced the bill Dec. 5. He said the measure seeks to assist the successful community reintegration of people with criminal records by making it easier for them to gain employment, creating stability.
“The purpose of Ban the Box is to allow all folks in the job market to compete for employment,” he said.
Several individuals with criminal records testified that the bill would help them gain a job interview, giving them a chance to explain their criminal histories to potential employers.
Studies show that individuals with criminal records suffer discrimination when seeking employment. The discrimination is worse for minority populations, according to the findings included in the bill.
Mosby said that his bill only removes initial hiring barriers for people with criminal records, and it does not prohibit organizations from conducting background checks.
The council passed the bill Feb. 26 on the condition that it is amended to allow businesses and organizations that work with vulnerable populations to inquire about applicants’ criminal histories. The council is expected to vote on the bill March 3.
Also see:
At 30, Lobby Night draws legislative veterans, greenhorns
As politicians, bishops take sides, minimum wage raise winners, losers uncertain
Church Chatter: From ravioli in Little Italy to a winning video in Fallston
PrevNext