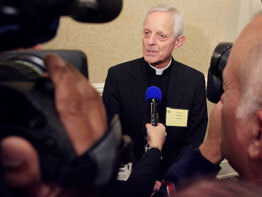 WASHINGTON – Washington Archbishop Donald W. Wuerl said he hopes Pope Benedict XVI’s visit to the nation’s capital next spring will deepen the faith of Catholics in the Archdiocese of Washington and give them new energy.

“Personally, I’m thrilled that he will be here and be with all of us,” he said.

“There is so much renewal going on, among our young people, in the whole church,” he said. “His visit will be a reaffirmation of that. But also I’d like to think it’s going to be a way of just re-energizing us.”

He said he believes the emphasis of the pope’s trip will be “on the renewal of the faith life of the church.”

Archbishop Pietro Sambi, apostolic nuncio to the United States, announced the pontiff’s April 15-20 visit to Washington and New York – billed as an “Apostolic Visit to the United States of America and to the Seat of the United Nations” – at the Nov. 12 opening session of the U.S. bishops’ national meeting in Baltimore.

Pope Benedict’s main public event in Washington will be a Mass April 17 at the Washington Nationals’ new baseball stadium.

He said he and other church officials have been laying the groundwork for the visit since August, but he did not know for sure if it would happen until the nuncio officially announced the planned papal itinerary.

The pope is to arrive in Washington April 15 and meet with President George W. Bush at the White House the following day, which also happens to be the pope’s 81st birthday. That afternoon he will address the U.S. bishops – probably at the Basilica of the National Shrine of the Immaculate Conception, Archbishop Wuerl said.

After the stadium Mass April 17, the pope is to meet with heads of Catholic colleges and universities and diocesan education leaders at The Catholic University of America, followed by a meeting with leaders of non-Christian faiths at the Pope John Paul II Cultural Center.

During a midday press conference Nov. 12, Archbishop Wuerl said that in visiting the nation’s capital “the Holy Father is attempting to speak to the church throughout the United States.”

He said that when it was first announced last summer that the pope was considering a U.N. visit next spring “it seemed appropriate to invite him to Washington.”

The fact that the pope would make Washington his first stop “says to me that he sees this as a center representing the entire church in the United States,” he said.

Besides being the home of Catholic University and the national shrine, Washington is the location of the U.S. Conference of Catholic Bishops’ headquarters.

He added that the pope’s plan to address representatives of Catholic higher education highlights the importance of faith formation and Catholic education in the life of the church.

The archbishop said preparing for the papal visit “will be a lot of work, but it’ll be joyful work, because we’ll be welcoming the head of the church. We’ll be welcoming the successor to Peter, and he will come here to say to all of us, ‘Be strong in your faith. … Be a light of the Gospel to this country.’“

Asked how ticket distribution would be handled for the stadium Mass, Archbishop Wuerl said he did not know yet.

“I suspect there will be more people who want to see and be with the pope than there are places at the stadium. … We have to take into account that there will be people coming from all over the country,” he said. “They will not see this as a Washington event. They will see it as a national event.”