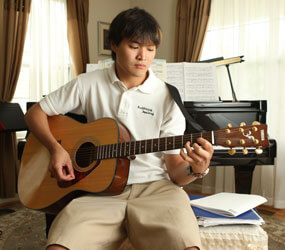 Eighteen-year-old Dan Gogue may believe in starting out small, but the articulate, passionate teenager has big dreams.

“I like to try everything,” said Dan, who taught himself to play the guitar and switched from the violin to the viola so that his school could have an esteemed string quartet. “Every time the bar has been raised, I’ve always been able to adjust myself and meet the new bar and go beyond.”

Having an older sister with Down syndrome, and watching her earn gold medals in the Special Olympics and obtain a job, has inspired the teen.

“I see her as a sign that nothing can stop you,” Dan said. “She doesn’t know that I feel like that. She does so much more than people expect.”

A skier since age 7 and an avid snowboarder, Dan has also volunteered his time with the adaptive program at Ski Liberty, helping injured war veterans learn to ski.

When he watches individuals ski with just one leg, he sees that there don’t have to be boundaries for a person, and that he is blessed to be healthy.

“I’m inspired by them,” Dan said. “There are people out there who would stop at nothing to do what they love.”

Dan’s own passions center around music and politics.

When it comes to the U.N., Dan says, “I’m just fascinated with the literature that goes into organizing this giant group.”

“I read the United Nations Charter and the Declaration of Human Rights,” said Dan, who is Korean American. “It’s the most amazing piece of writing ever created. To me, the entire world being able to agree that this is what you are as a human, this is what you deserve, this is what you’re supposed to have – for them to lay down something this fundamental and have them agree on it is something that blows my mind.”

He helped his school U.N. team with its first award this year in the largest competition on the East Coast.

Dan said his is inspired by Ban Ki Moon, secretary general for the United Nations, and that he hopes to one day be an ambassador. For now, he will attend the American University School of International Service in the fall.

In addition to his music ministry at school, Dan plays the violin at church, his father plays piano, his mother sometimes sings with the choir, an uncle plays bass guitar and another uncle plays guitar.

And through it all, faith has prevailed.

As a participant in the summer High School Leadership Institute (High-LI) of the Archdiocese of Baltimore, Dan said he heard a phrase from Calvert Hall College High School, Towson, campus minister Marc Parisi, that has stuck with him.

“Jesus came, God was praised, and it was good,” Dan said. “If you can say that at the end of whatever you do, then you’ve done something right.”

Another phrase that he applies to his life, which he heard during a priest’s homily at the March for Life, is, “God doesn’t call the qualified; he qualifies the called.”

“It just hit me, because God is not looking for the perfect people or the people who are the best at everything,” Dan said. “He’s calling you. And he’s going to make you ready. He’s going to be what’s there the whole time making you ready.”