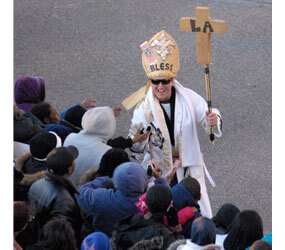 “I think it’s another sign of hope in that our rebuilding is not just a possibility – it’s a reality,” the New Orleans native said after the underdog Saints – playing in their first Super Bowl – won the game with a 31-17 comeback victory over the Indianapolis Colts.

“The spirit of the city has changed,” he added. “It’s another sign that God is faithful.”

Archbishop Aymond celebrated a Mass Feb. 7 for New Orleans Saints owner Tom Benson and his wife, Gayle, and relatives, friends and team officials at their Miami hotel before the Super Bowl.

“All week long, people have been asking me, ‘Who will win the Super Bowl?’ ” the archbishop told the 300-member congregation, all dressed in Saints’ black and gold.

“And it’s obvious, of course. History gives us a glimpse as to the answer,” he said. “We know historically that many of the saints of old went into battle for the faith. And when they did so, they rode on colts. In the battle, the colts got wounded, but the saints had victory in eternal life. So, the Saints will win.”

Those at the Mass included retired New Orleans Archbishop Philip M. Hannan, 96, two Dominican sisters from St. Louis Cathedral Academy in New Orleans and several other clergy and religious invited to the game by Benson.

Citing the readings of the day, Archbishop Aymond said Jesus sometimes gave the apostles “odd” advice, such as to cast their nets into the deep even though they had caught nothing all night.

“We are to persevere and to go the extra mile or two and to have hope,” Archbishop Aymond said. “Is that not the story of Tom Benson and the Saints? … There are times when part of our lives look like an empty net, and yet Jesus says, ‘Go out into the deep, don’t give up hope, persevere, let God direct you.’“

The Mass ended with a rousing a capella rendition of “Oh, When the Saints Go Marching’ In.”

Archbishop Aymond said he was thrilled that his prediction had come true.

“Wow, what a great gift to the Saints, to Mr. Benson and to the city,” Archbishop Aymond said. “We’re just so grateful that they made us very proud. All we can say is, ‘Bless you, boys. Bless you for representing our city very well.’ ”

Archbishop Aymond admitted there were moments, especially when the Saints fell behind 10-0, when he was concerned that this would not be the Saints’ year to erase decades of football misery.

“Then the game was getting closer and closer, and then I thought I was having a heart attack,” Archbishop Aymond told the Clarion Herald, New Orleans’ archdiocesan newspaper. “Then someone turned to me and said, ‘Don’t worry, one of the persons sitting over there is a cardiologist.’ ”