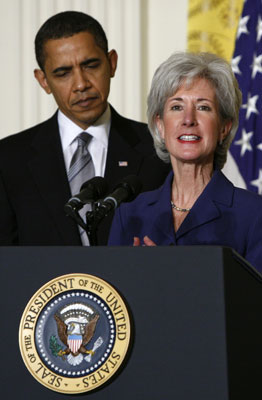 KANSAS CITY, Kan. – The archbishop who told Kansas Gov. Kathleen Sebelius not to present herself for Communion unless she repudiates her support for keeping abortion legal says her nomination as secretary of the Department of Health and Human Services does not bode well for health care policies in this country.

In a column for the March 6 issue of the archdiocesan newspaper, The Leaven, Archbishop Joseph F. Naumann of Kansas City said Gov. Sebelius, who is Catholic, “represents well Catholic social teaching” on some important issues but not on abortion or embryonic stem-cell research.

“With her history of support for legalized abortion and embryonic stem-cell research, it is troubling the important influence that she will have on shaping health care policies for our nation,” Archbishop Naumann wrote.

He called Gov. Sebelius “a very bright and gifted leader” who has advocated for low-income housing, health care for poor children and adoption incentives. But he said her abortion position made her nomination “particularly troubling.”

In the column, Archbishop Naumann also discussed his decision – announced in a 2008 column in The Leaven – to ask Gov. Sebelius not to go to Communion.

“I did this in the hope that it would motivate Gov. Sebelius to reconsider her support for what is an intrinsic evil – the destruction of innocent human life by abortion,” he said. “I also took this pastoral action to protect others from being misled by the governor’s public support and advocacy for legalized abortion.”

In a 2006 speech Gov. Sebelius acknowledged that her Catholic faith teaches “that all life is sacred,” and she said, “Personally I believe abortion is wrong.”

“However,” she added, “I disagree with the suggestion that criminalizing women and their doctors is an effective means of achieving the goal of reducing the number of abortions in our nation.”

If her nomination is approved, Archbishop Naumann said, Gov. Sebelius would become “another Catholic supporting legalized abortion in a prominent national position,” along with Vice President Joe Biden, House Speaker Nancy Pelosi, “and unfortunately a host of Catholic senators and members of the House of Representatives who support legalized abortion, contrary to the clear and consistent teaching of their church.”

“It saddens me that so many Catholics, to gain political advancement, have chosen to compromise their Catholic faith by their failure to defend the most fundamental of all human rights – the right to life,” he added.

He also said he is “concerned personally” for Gov. Sebelius, because her nomination to the HHS post “places her in a position where she will have to make many decisions that will in all probability continue her personal involvement in promoting legalized abortion and her cooperation in this intrinsic evil.”

He urged prayers for “all Catholics who serve in public life – that they will have the courage and integrity to be true to the teachings and principles of our faith, no matter the political consequences.”

Archbishop Naumann said President Barack Obama’s nomination of Gov. Sebelius comes as no surprise because of the president’s own support for keeping abortion legal.

“Though many people voted for President Obama not because of his support for legalized abortion, but despite it, voters in effect gave him the ability to appoint individuals who share his anti-life views to his Cabinet and, even more troubling, to the courts,” he said.

The archbishop warned of the effects Gov. Sebelius’ appointment could have on the important task of health care reform, which President Obama has made a top priority of his administration.

“There are those who have great influence within the Obama administration and with whom Gov. Sebelius has been associated throughout her political career – e.g., Planned Parenthood, National Organization for Women, NARAL (Pro-Choice America), etc. – who want abortion not only to be permitted in this country but considered a right,” he said.

“If they are successful in their efforts to have abortion included among ‘basic health care services,’ then it is entirely possible that doctors, nurses and health care institutions will be compelled to cooperate in the provision of abortion,” Archbishop Naumann added. “Those advocating for abortion to be considered a ‘right’ would love to see Catholic hospitals faced with the choice to either cooperate in providing abortions or close.”