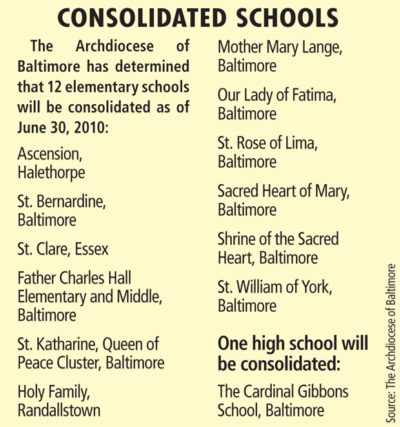 Archbishop Edwin F. O’Brien has decided to consolidate 13 schools – 12 elementary and one secondary – after a year-long scrutiny of the Archdiocese of Baltimore’s educational system.

The archbishop said there is a place for every displaced student at schools labeled “receiving schools.”

In Baltimore County, Ascension in Halethorpe, St. Clare in Essex and Holy Family in Randallstown will not reopen.

The high school that will not reopen in the fall is The Cardinal Gibbons School, in Baltimore. The 297 students at the all-boys school will be encouraged to attend local Catholic high schools.

A total of 2,160 students from consolidated schools will be encouraged to move to other Catholic schools. More than 300 jobs will be affected by the consolidations.

In conjunction with the announcement, the archdiocese is releasing a consolidation plan and report titled “Preserving the Tradition, Transforming the Future: The Rebirth of Catholic Schools in the Archdiocese of Baltimore.”

According to the report, Catholic schools owed $11.7 million as of December 2009 for unpaid insurance, pension contributions, payroll advances and other subsidies. The report said that schools “are on track to add an additional $2.2 million to that debt for this fiscal year.”

In a letter that opened the document, Archbishop O’Brien said, “This report details the top-to-bottom review that was conducted, the comprehensive research and analysis performed, and the open and transparent process carried out in the last 12 months, including input from more than 1,500 participants.

“I am confident that no stone was left unturned and that this report benefits from that diligence.”

The reorganization is one of the biggest in the archdiocese’s history and one that the archbishop believes will be a step to save schools across the board.

Economic forces and demographic shifts have combined to result in sharp declines in enrollment. Of the 32,500 available seats in schools, 10,000 are currently empty.

Baltimore City once numbered nearly a million residents; in the last two decades, the city has dwindled to just above 600,000 people. In 1980, there were 27 archdiocese elementary schools in Baltimore City serving 7,300 students. By 2008, there were 18 schools serving 3,800.

Nine archdiocesan or parish elementary schools will serve the city in the fall of 2010, thanks to the addition of a new school inside Seton Keough High School. The report said it hopes the new west Baltimore school will eventually have its own building.

Archbishop O’Brien told The Catholic Review in an exclusive interview that Baltimore remains a top priority during his tenure.

“I heard from city leaders at a recent meeting about our effort to improve our schools, how pervasive poverty is in Baltimore City and how crucial education is to overcoming that,” the archbishop said.

“Sometimes I’ll go to bed in the night, wake up and think about all the people affected and the scope of this whole thing,” he said.

A committee of educational, business and political leaders is currently working on a strategic plan for the reconstituted archdiocesan school system. That plan is expected to be delivered to the archbishop in June.