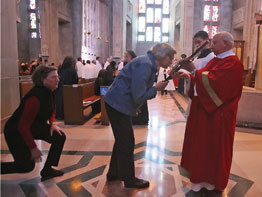 One of the few lights on inside the Cathedral of Mary Our Queen before the Good Friday Liturgy of the Lord’s Passion began March 21 was the light over the crucifix. It seemed to set a solemn tone as Catholics of all ages quietly knelt in prayer at the Homeland cathedral.

At 3 p.m., Archbishop Edwin F. O’Brien and priests silently processed in and prostrated themselves before the altar.

In his homily, Archbishop O’Brien spoke about Jesus’ “extravagant generosity.”

He said the most praised and respected people throughout time are often those who can identify with others. “Might this not be one reason” for the attraction to Jesus, he added.

“He emptied himself to be with us,” said Archbishop O’Brien, which demonstrated God’s infinite love. “He was – he is – always there.”

Jesus handed his life over to his Father for sinners – he came to save each of us, the archbishop explained. “He embraced the cross willingly.”

After the general intercessions and the offering, each person was invited to walk forward to venerate the cross. Reverently, some kissed the cross and others genuflected. Communion – consecrated at the Mass of the Lord’s Supper on Holy Thursday – was then distributed.

John C. Murphy and Dr. Frances Lewis, who have been parishioners of the cathedral for more than 20 years, went to the Holy Thursday Mass in addition to the Good Friday liturgy.

Dr. Lewis, who was to sing at the 9:15 a.m. Mass on Easter Sunday, praised the choir. “The choir has an unbelievable schedule this week.”