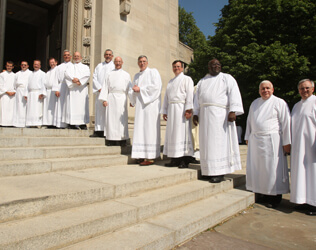 Archbishop Edwin F. O’Brien ordained 13 new deacons for the Archdiocese of Baltimore during a joyful May 23 liturgy that highlighted their commitment to prayer and service.

A crowd of about 2,000 people filled the Cathedral of Mary Our Queen in Homeland for the celebration – spilling out of the pews and lining the cathedral’s grand stone walls to witness a liturgy rich in ancient symbolism.

Joseph Gill, a parishioner of St. Peter the Apostle in Libertytown, was ordained a “transitional deacon,” which means he will later be ordained to the priesthood.

The archbishop ordained 12 other men “permanent deacons” who will not become priests. The number marks the second largest class of new deacons to be ordained in the past 10 years.

During the ordination, each deacon knelt before Archbishop O’Brien and placed his hand in those of the archbishop, promising respect and obedience to the archbishop and his successors. Rev. Mr. Gill made an additional promise to live a life of celibacy.

In an expression of their total dependence on God, the men lay prostrate in the sanctuary as the congregation chanted the litany of the saints – invoking 77 saints by name to intercede for the new deacons. The archbishop then solemnly laid his hands on the head of each kneeling ordinand, conferring the Holy Spirit upon the men and ordaining them to the diaconate with the prayer of ordination.

The deacons were vested with the stole and dalmatic, liturgical garb that signifies their new office. The archbishop also presented each of them with the Book of the Gospels, instructing them to “believe what you read, teach what you believe and practice what you teach.”

In his homily, Archbishop O’Brien called “diakonia,” service, the “dominant word and theme in this Mass of ordination and for the rest of your lives.”

“As official liturgical ministers of the church, you will baptize, witness marriages and preside at funerals and other ceremonies,” Archbishop O’Brien said. “But it is at the Eucharist that your new life will be fully realized. As ministers at the altar, you will make petitions on behalf of God’s people, assist with the holy gifts of bread and wine, call the faithful to repentance and to peace, distribute the sacred body and blood of the Lord and, finally, dismiss the people of God to take his Gospel to a hungry world.”

The archbishop challenged the new deacons to make their service at the altar “transparently reverent, ever mindful that it is here that you encounter the all-holy.”

He asked them to steep their lives in prayer so that they will be “credible preachers of the word.”

“Our Holy Father suggests that our people will know whether your work and words spring from prayer or are manufactured at a desk,” said Archbishop O’Brien. “I would suggest that unless you ponder the word of God prayerfully and daily in silence, the voice you speak will be only yours, not the voice of Jesus.”

At the conclusion of the liturgy, the new deacons were mobbed by family and friends who snapped photos, embraced them and asked for their prayers.

“The archbishop spoke of joy and the closing hymn spoke of joy, and that’s what we’re all feeling right now,” said Deacon Shepard as Jacob, his 6-year-old grandson looked on with an approving smile and promptly announced that he would now call his grandfather “Deacon Pops.”

“The church called us and God called us, and somehow we made it through formation,” Deacon Shepard said. “We’re looking forward to a wonderful new chapter in our lives.”

Deacon Kendzierski said he was deeply moved by lying prostrate on the cathedral floor.

Lisa Kendzierski said she couldn’t be prouder of her husband and all the deacons.

“I think the church should be so happy today to have ordained 13 men,” she said. “I had my eyes on all of them throughout the liturgy.”

Deacon Maloney said he was “speechless” at the thought that he is now an ordained clergyman.

“I’m overwhelmed with emotion in thanksgiving for everything that has happened over the last four years,” he said. “It’s all come together today. Wow!”

Like his brother deacons, Deacon Witherspoon said he was anxious to begin his diaconal ministry.

“I’m looking forward to evangelization,” he said. “We’ve got to try to bring some more people into our church.”