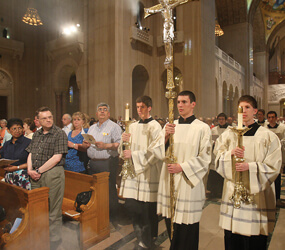 Albert Vojik was awestruck as he stared at the gigantic mosaic of Christ in Majesty that looked down from the great dome of the Basilica of the National Shrine of the Immaculate Conception in Washington, D.C.

Made up of more than 3 million glass tile pieces in about 4,000 brilliant shades of color, the image showed Christ seated on a glittering rainbow throne. The strong and youthful depiction of Christ with his arms outstretched in triumph was a reminder in a city of power that God is the ultimate power.

“I’m just amazed,” said Mr. Vojik, a parishioner of St. Clement Mary Hofbauer in Rosedale. “How did they ever get all that artwork up there? It’s beautiful.”

Mr. Vojik was one of 400 Catholics from more than 20 parishes across the Archdiocese of Baltimore who participated in the April 25 archdiocesan pilgrimage to the national shrine.

Archbishop Edwin F. O’Brien led the spiritual journey as part of a celebration of the Pauline Year and the close of the 200th anniversary of the elevation of the Baltimore Diocese to archdiocesan status.

The visitors prayed the rosary, adored the Blessed Sacrament, listened to faith talks and toured the cathedral’s more than 60 chapels and oratories. A small group of teens participated in a special program in the shrine’s crypt and the Archdiocesan Choir provided sacred music during the pilgrimage.

In his homily at the closing Mass, Archbishop O’Brien said millions of Catholics have visited the basilica to “see this spectacular monument of America’s love for the Blessed Mother, and, more to the point, to beg her intercession for our great nation and for the hopes known only to faith-filled hearts.”

The archbishop noted that it was during the Sixth Provincial Council of Baltimore in 1846 when the nation’s bishops “decided to memorialize their declaration that the United States would henceforth be under the watchful care of Mary Immaculate, Patroness of America.”

The pastor of St. Paul in Ellicott City recalled being present for a Mass celebrated by Vietnamese Cardinal Francois Nguyen Van Thuan, who spent 13 years in a Communist prison including nine in solitary confinement.

“In his homily, he told us how he celebrated Mass in prison with a few crumbs of bread and a few drops of water and wine in the palm of his hand,” Father Buening said, comparing Cardinal Thuan’s sufferings to those of St. Paul. “You can’t make a prison dark enough to block out the power of the Son.”

As he perused some of the historic artifacts at the shrine, Floyd Williams was impressed to see the guest registry signed by Pope Benedict XVI during last year’s papal visit to the national shrine. The pope listed his address as “Vatican City.”

“I’m a Catholic and I wanted to see these things that pertain to our faith,” said Mr. Williams, a parishioner of St. Bernardine in west Baltimore. “It’s very, very thrilling to see artifacts of our church’s leaders.”

Tessy Kunnappallil, a parishioner of Our Lady of Perpetual Help in Ellicott City, said she enjoyed praying the rosary and joining with other Catholics from throughout the archdiocese for the pilgrimage.

“It’s very good for the whole people of the archdiocese to feel a sense of communion with one another, with Archbishop O’Brien and with other parishes,” she said.

The Washington basilica is the largest Roman Catholic church in North America and one of the 10 largest in the world. Pope Pius X approved plans for the building in 1913, and the church’s cornerstone was laid in 1920 by Baltimore’s Cardinal James Gibbons. The church’s crypt was finished in 1926, and the upper church was dedicated in 1959.