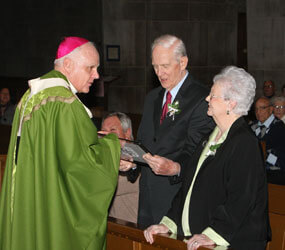 On a day set aside to honor married couples, Archbishop Edwin F. O’Brien warned of serious threats to the institution of marriage and called on Catholics to speak out against the proposed legalization of same-sex marriage in Maryland.

In a Feb. 13 homily delivered during the archdiocesan World Marriage Day Mass at the Cathedral of Mary Our Queen in Homeland, the archbishop said Maryland’s law defining marriage as the union of one man and one woman “is not an arbitrary recognition of one relationship with many possibilities.”

“This recognition, bestowed on marriage by societies throughout human history, originates in a simple biological fact,” Archbishop O’Brien said. “The union of one man and one woman is the only relationship capable of creating children and nurturing them together as father and mother.”

Stripping marriage of its unique connection to parenthood “erases from law the right of a child to a mother and father,” Archbishop O’Brien said, “and ignores an essential question of why government favors marriage between one man and one woman over all other relationships.”

The archbishop cited the U.S. Department of Health and Human Services, which said that children raised by parents in healthy marriages are physically and emotionally healthier and more likely to succeed academically. He added that for the last five years the federal government has invested more than $150 million annually “for good reason” to market healthy, traditional marriages.

“While we are opposed to same-sex marriage,” he said, “we must unconditionally condemn discrimination against homosexual persons whose dignity as daughters and sons of God we accept, respect and defend.”

Society’s focus should be on strengthening marriage, Archbishop O’Brien said, “not dismantling it altogether.”

During the liturgy, couples renewed their marriage vows. Those celebrating special anniversaries were publicly honored.

This year, 200 couples registered with the archdiocese to mark special anniversaries at World Marriage Day – 100 of whom celebrated anniversaries of 50 years or more. Edwin and Gertrude Becker, parishioners of St. Isaac Jogues in Carney, were the longest-married couple at 76 years, but could not attend the Mass.

The longest-married couple present at the cathedral was Gordon and Eileen Schultze of the Holy Family Catholic Community in Middletown – who married on Feb. 8, 1941 in Brooklyn, N.Y.

After taking photographs with the archbishop, the Schultzes told The Catholic Review their secrets to the longevity of their marriage.

“The big secret is a tremendous love for our God and commitment to one another,” Gordon Schultze said. “Last, but not too far off the second one, is to keep the romance going.”

Asked how they kept romance alive after 70 years, the Schultzes laughed and looked at each other lovingly.

“He comes and sits beside me on the couch every night and we hold hands,” the 91-year-old woman said with a smile. Her 90-year-old husband confirmed his wife’s report.

“Every night,” he said. “Even if we’ve had problems and disagreements, one of us will do the same thing every night.”

The Schultzes, who have 7 children, 13 grandchildren and six great grandchildren, remembered that in their youth, they loved ballroom and lindy hop dancing. Their specialty was the Peabody and they often competed in local contests.

“We can still get up and move around,” Gordon Schultze said, “but nothing like we used to do.”

Frank and Catherine Frattali, parishioners of the Church of the Resurrection in Ellicott City, are celebrating their 55th anniversary. They married at the now-closed St. Katharine of Siena parish in Baltimore. Their first date had been at Memorial Stadium for the Ice capades.

“We worked at understanding each other,” 84-year-old Catherine Frattali said.

“You have to avoid making a big issue of something,” he said. “That’s the way you get along the way you should.”

Many couples present for the cathedral celebration expressed concern about the state of marriage and the possibility of same-sex marriage in Maryland.

“I feel the outside is influencing marriage today a lot more than it did,” Catherine Frattali said.

Asked if same-sex marriage should be legalized, Gordon Schultze responded by repeatedly saying “no way.”

“If you go all the way back to the Big Bang,” he said, “the dear Lord of ours made this marvelous universe and he designed two people of the human race – a male and a female. It should never be changed.”