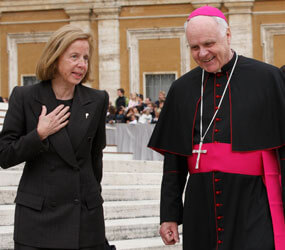 VATICAN CITY – The life and holiness of the late New York Cardinal Terence J. Cooke, summarized in a 2,000-page tome bound in white, was presented to Pope Benedict XVI at the end of his weekly general audience April 14.

The volume is the “positio” or position paper, which will be filed formally with the Congregation for Saints’ Causes as an initial step in the Vatican process to determine whether the cardinal should be beatified and canonized.

As the current archbishop of New York, Archbishop Dolan oversaw the final stages of the diocesan investigation of his cause.

Archbishop O’Brien’s ties to the late cardinal were more immediate; he served as vice chancellor of New York and as communications director of the archdiocese in the 1970s and early 1980s, and as Cardinal Cooke’s personal secretary in 1982-83.

“He was a holy man and people just knew it,” Archbishop O’Brien told Catholic News Service after the papal audience. “At a very difficult time in the life of the church, he used to say his goal as archbishop was to move the whole church forward, but together.”

Handal, head of the Cardinal Cooke Guild, said that once the Congregation for Saints’ Causes officially approves the “positio,” those working on the cause will begin preparing the paperwork about a healing in Rome that they believe is a miracle granted through the late cardinal’s intercession. A miracle is needed for beatification.

The Vatican announced April 14 that dates had been set for seven beatification ceremonies in the next three months, including a Mass June 6 in Warsaw, Poland, for the beatification of Father Jerzy Popieluszko, the chaplain to Poland’s Solidarity labor union who was murdered by members of the communist government’s secret police in 1984.

The other beatifications involve three Spaniards, two Italians and an Argentine nun.