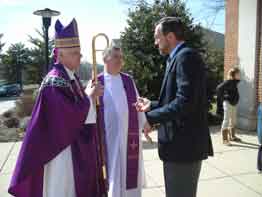 HAGERSTOWN – In his first visit to Hagerstown since his Oct. 1 installation, Archbishop Edwin F. O’Brien celebrated Mass with the parishioners of St. Ann and encouraged them to support this year’s Archbishop’s Lenten Appeal.

The March 2 parish visit was the archbishop’s last of three pastoral stops to faith communities around the archdiocese promoting the annual capital campaign. In February, he visited the Cathedral of Mary Our Queen in Homeland and Our Lady of the Fields in Millersville.

“I know the expenses of keeping a parish afloat,” Archbishop O’Brien told the Hagerstown parishioners at the start of the liturgy. “I ask you to do what you can. So much depends on it throughout the archdiocese.”

The Lenten Appeal provides funds to programs supporting Catholic education, pastoral ministries and outreach to the poor throughout the archdiocese and around the world. This year’s fundraising goal is $6.5 million, and St. Ann has been asked to raise $61,900. Parishes receive 25 percent of every dollar they raise up to their parish goal and 50 percent for all funds beyond the goal.

A few of the programs that benefit from the Lenten Appeal include the O’Dwyer Retreat Center in Sparks, Hispanic ministry, pro-life ministries, Catholic Charities, the St. Vincent de Paul Society of Baltimore, Western Maryland Housing and Camp Glow for adults with developmental disabilities.

In his homily, Archbishop O’Brien reflected on the blind man whose sight was restored by Jesus. He encouraged Catholics to see others with the eyes of Christ. During the Mass, he also encouraged parishioners to pray for religious vocations.

Archbishop O’Brien told The Catholic Review he believed parishioners throughout the archdiocese are open to supporting the Lenten Appeal.

“I think you read the Scriptures, and you find a lot of talk about sharing your resources with others – being generous with your financial contributions,” he said. “So it’s an important part of the church, and it’s a great opportunity for the people to grow in love.”

Cindy McKoin, a St. Ann parishioner and contributor to the Lenten Appeal, called it an honor to have the archbishop visit her parish. The Lenten Appeal is important because of the good work it promotes, she said.

“We are called as Christians and as Catholics to give of our time, our talent and our resources,” she said. “I also think that it is critical that we share with those who have less than maybe I have.”