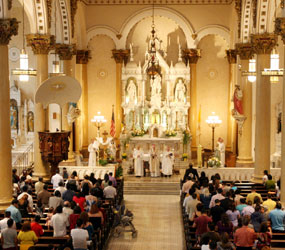 Archbishop Edwin F. O’Brien celebrated Masses in English and Spanish at St. Michael parish in Fells Point May 22, marking the first time he has personally addressed the community since it was announced in February that the parish would move to Sacred Heart of Jesus in Highlandtown.

The archdiocese plans on making Sacred Heart of Jesus the hub of Hispanic outreach in Baltimore City. The re-configured church will debut during the first week of August. St. Michael, which has a significant Hispanic population, has operated for years in the Redemptorist-run Catholic Community of Fells Point, along with St. Patrick, which will become a mission church of Sacred Heart of Jesus.

St. Michael’s church building has more than $9 million worth of repairs needed, which was cost prohibitive and led to the closing. The future of the St. Michael campus has not been decided.

“I know the news of the invitation to join the communities from Sacred Heart of Jesus and Our Lady of Pompei came as a great surprise to you,” the archbishop said during his homily. “It was even a moment of distress for many of you. This has been very clear to me, especially in our various meetings with members of the community. All of us regret the reality of the challenges facing this church and this campus, and your sense of mourning and loss is heartily understandable.”

He continued: “Nonetheless it is my sincere hope, my desire and my vision for the diverse community in Southeast Baltimore that together we will model the humility and selflessness of those first disciples and make the sacrifices necessary for the spreading of God’s word.”

Redemptorist Father Robert Wojtek, pastor for six years of the Catholic Community of Fells Point, said the archbishop coming to St. Michael was meaningful for parishioners.

“He’s the pastor and it’s important for them to see him and to know he’s with us,” Father Wojtek said. “The physical presence, the being there, says a lot.”

Father Wojtek praised the archbishop’s dedication to the transition through committing archdiocesan employees and time.

“He has a real interest in making this work,” Father Wojtek said. “It’s a demonstration of his love for our community.”

The archbishop praised the Redemptorists’ success at St. Michael for 160 years. He said they have been a vital piece of welcoming immigrants archdiocese-wide. He said German immigrants traveled great distances to be with the Redemptorists at one time, and he hopes the Hispanic community at St. Michael will travel two miles to Sacred Heart of Jesus.

“For many of you, this is yet another part of the journey to a new and different life from the one which many of this parish knew in your home countries throughout Latin America,” the archbishop said during his homily. “The courage, resilience and creativity which you have already shown, as well as your unwavering faith in the crucified and risen Lord, and his holy Catholic Church, is an example for us all. I know you will continue, under the guidance of the Holy Spirit, on this faith-filled path.”

The Remptorists also administer to Sacred Heart of Jesus. Pastor and Redemptorist Father Gerard J. Knapp will remain at the parish as the community’s superior there, according to Father Wojtek.

Father Wojtek, it was announced at the Mass, has been appointed pastor of the new Sacred Heart of Jesus.

“I think it’s very important because it’s walking through the pain with them, but also into the hope,” Father Wojtek said. “They are looking for a sense of continuity also. For the people of Sacred Heart, they’ve been most gracious. I’m looking forward to working with them. They’re very good people. I think God is inviting us to a new reality. I feel blessed and privileged to be an instrument in that new reality.”

A transitional council has been created to facilitate the move to Sacred Heart of Jesus. St. Michael will host a “town council meeting” for its parishioners June 12 to address further questions.

“I’m just hoping that everyone will follow us,” Zelaya said. “The change is for the good, definitely.”