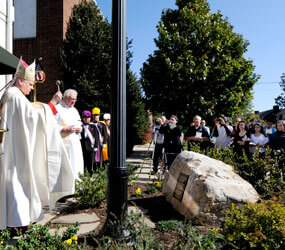 The Seafarers’ Center offers sacramental and welcoming services to the more than 12,000 seafarers passing annually through the Helen Delich Bentley Port of Baltimore. With the expansion, the center gained the chapel, as well as a new walled patio, lounge and clothing room.

Bentley attended the prayer service, along with Peter Davio, state deputy of the Maryland State Council Knights of Columbus, Catholic Daughters national regent-elect Anne Nelson and the Knights of the Columbus Color Guard.

The Apostleship of the Sea is vital to seafarers, who are away from home nine to 10 months out of the year, living and working in conditions often not up to U.S. standards. They rely on the ministry to communicate with loved ones, get access to medical care and shop.

In his homily during the prayer service at St. Rita Parish, across the street from the center, Archbishop O’Brien referred to the day’s Gospel reading.

“The Apostleship of the Sea and its headquarters is a constant reminder to us of what our daily life should be. This is a monument on behalf of those who will not find charity anywhere else,” he continued.

“We’re all about helping the seafarers of today’s treacherous maritime environment,” said Monsignor John L. FitzGerald, executive director and chaplain of the archdiocese’s Apostleship of the Sea ministry.

Referring to the entrance to the Seafarer’s Center, which reads “welcome,” he said, “When they see that window of 24 languages and scripts, they know they are not strangers. They are welcome.”

In addition to offering Mass and confession, the center has a stock of religious items – free to the seafarers – such as Bibles, scapulars, medals, prayer cards and rosaries.

Visitors can also take advantage of other free offerings, including Wi-Fi computer access, printers, fax service, televisions and telephones. Secular and non-secular books and magazines, as well as men’s clothing and toiletries, coffee, snacks and first aid items, are available. International calling cards can be purchased and used to call home.

Amy Middleton, the center’s volunteer Administrative Director, says it runs with the help of about 400 monthly donors and the Knights of Columbus.

If the seafarers cannot leave their ship for any reason, such as an expired shore pass, the center’s ship visitors will come to their aid, bringing requested items and wireless Internet so that they can communicate with their families.

Andy Middleton, Amy’s husband, is the center’s volunteer director of operations. He mans the phone line 24 hours a day, coordinates requests from ships and dispatches the ministry’s three vans to take seafarers on shopping trips and other errands. Time is critical, because the men are in town only as long as it takes to offload the ships, 24 hours or less,.

According to Middleton, the two most popular shopping destinations are Walmart and Best Buy.

“They buy electronics, laptops and cameras,” he said. “They can buy it cheaper here and take it home with them. One man even bought a bike to take home to his daughter.”

The Seafarer’s Center currently has 22 volunteers, and it is seeking more to act as ship visitors, center hosts and clerical staff.

“Our goal is to have someone here consistently seven days a week. God willing, we’ll have enough volunteers,” said Middleton.

The volunteer staff was on hand Oct. 15 to lead guests on tours. Before they went inside, the archbishop blessed the outdoor monument, which thanks the world’s seafarers for their efforts and memorializes those who have lost their lives on duty.

The monument’s plaque closes with words from Psalm 107: “Blessed are they who go down to the sea in ships.”