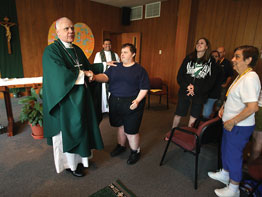 He smiled as the participants of Camp GLOW (God Loves Our World) approached throughout the July 24 Mass he celebrated at the Monsignor O’Dwyer Retreat House in Sparks.

Many of the campers, adults with developmental disabilities, had no idea he was leader of the Archdiocese of Baltimore.

“That’s what’s so wonderful about this camp,” said Bill Fleming, its coordinator. “We’re all on a level playing field. He was just a nice man. If you’re accepting, you’re accepted. It’s like he walks down the hall and they’re like, ‘Hey, how are you doing?’ ”

According to Mr. Fleming, the intimate Mass was the first celebrated at the camp by an archbishop of Baltimore. The camp has operated under the direction of the archdiocese’s Division of Evangelization and Catechesis since the 1970s as a way to help spiritually and socially enhance people with disabilities.

The weeklong, residential camp, divided into two summer sessions, is an annual vacation featuring activity-filled days for the campers.

It is also fulfilling for the volunteers at the camp, who are known as companions.

“It’s like a retreat for us, not just for them,” said Matt Himes, a three-year volunteer. “They see so much out of very simple things. You just feel such presence of something when they’re around. They can draw a picture, just scribble something, and see something amazing.”

The St. Isaac Jogues parishioner, an elementary and special education major at Mount St. Mary’s University in Emmitsburg, said he was humbled by Archbishop O’Brien’s visit.

“I just think it was really cool for someone that high up to see the love that is here, because it’s beyond what a lot of people have seen,” the rising sophomore said. “I just think everyone should see it – even if you just come for an hour.”

During his homily, Archbishop O’Brien walked to the front of the room, standing inches from his audience of about 50 campers and volunteers, and engaged them in a conversation.

Throughout the Mass, campers participated by doing readings, escorting gifts to the altar and expressing themselves through dancing.

During his homily, Archbishop O’Brien asked the campers what they were thankful for. The answers came fast and passionately: Camp GLOW, their companions, families and Jesus Christ.

Archbishop O’Brien excitedly used the mention of Jesus as a way to relay the story of a First Communion Mass he celebrated. He asked a girl that day about why children were baptized at an early age.

The archbishop said her reply was, “I was baptized as an infant because Jesus wanted to be with me from the very beginning.”

Archbishop O’Brien then looked at the people at Camp GLOW and encouraged them to open their hearts to Jesus.

“No matter what happens in your life,” he said, “no matter who’s around you, or what people think about you or what you think about others, the most important thing to remember is Jesus wants to be with you from the very beginning. He’s with you every moment of the day and every moment of your life. You are a house of God – each one of you.”