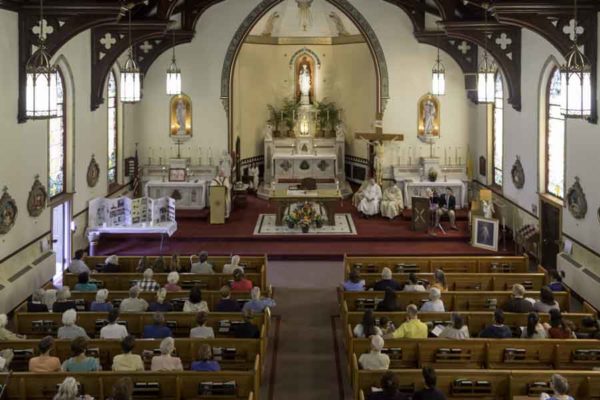 As we celebrate the 150th anniversary of St. Thomas Aquinas Parish it is important that we turn our attention to its foundations.

Today we remember with gratitude and love those whose faith, generosity, hard work and generosity made it possible for this parish to be founded and to accomplish its mission for a century and a half.

And so, in speaking of the church’s foundations, I am not referring in the first instance to the concrete, stone, and steel that undergird and support this church structure – but rather our foundations in the Lord Jesus Christ.

We find those foundations described for us in the Gospel. Clearly, the Lord intended to found his church on the Apostles but as the Risen Lord prepared to ascend into heaven, those foundations were looking shaky.

The very prospect of the Lord’s physical departure filled the apostles with dismay. That is why Jesus said to them and says to us, “Do not let your hearts be troubled. Have faith in God and faith in me!”

Jesus promised that he would go to prepare a place for his followers, and then return to take them unto himself, in heaven.

Nonetheless, fear, dismay, and even confusion continued to fill the Apostles’ hearts.

The Apostle Thomas expressed our doubts, fears and confusion when he said, “Lord, we don’t know where you are going, how can we know the way?” Notice that Jesus did not evade Thomas’ question but instead provided what I would describe as an exuberant answer: “I am the way, the truth and the life. No one comes to the Father except through me.”

Jesus is the way.

As God’s Son, Jesus became one of us and died to save us so that through him you and I would have access to God our heavenly Father.

Jesus is the truth.

As Son’s Incarnate Son, by his word and his works, Jesus reveals the Father’s love.

Jesus is the life.

Jesus, the Risen Lord conquered sin and death by his Cross and Resurrection.

Dear friends, Jesus is the only true and lasting foundation of the church.

But the Lord also intended that this foundation would be built upon – and for that reason, our reading from First Peter cries out: “Come to him, a living stone, rejected by human beings but chose and precious in the sight of God.”

Jesus who was betrayed, sentenced, and put to death is “the stone rejected by the builders that has become the cornerstone.”

But because he rose from dead, triumphing over sin and death, Jesus is not just any cornerstone but rather Peter calls him “a living stone” –

Jesus is not the only stone in the temple that is his church. Each of us, by baptism, is called to become a living stone in this temple.

Listen again to the words of St. Peter: “…like living stones let yourselves be built into a spiritual house to be a holy priesthood to offer spiritual sacrifices acceptable to God through Jesus Christ.”

So we are called not only to be the living stones that build up the church but also, through baptism, we are called to be a priestly people, a people who offer our lives as a living sacrifice to God in the Holy Spirit – lives of goodness, virtue, commitment, and love.

In other words, our daily life at home, at work, among our friends – our acts of charity for those in need, our joys and our sufferings – all that we have and all that we are is meant to become an everlasting gift to God.

And what makes the gift of our lives acceptable in the eyes of God is that our sacrifice is joined to the sacrifice of Christ, the Eucharist, which your parish priest offers on the altar, day after day and week after week.

By the example of his life, by preaching, by celebrating the sacraments, the priest is called to form his people into ‘a chosen race, a royal priesthood, a holy nation, a people God has made his own’ – words that indicate our staggering dignity in Christ Jesus.

Yet, even that is not enough. Jesus makes us a living temple and a holy priesthood for a purpose. That purpose is not to be inward looking but rather be outward bound,“to announce the praises of him  who called [us] out of darkness into his own wonderful light.”

The mission entrusted to us as baptized Christians and living members of the Body of Christ, the church– is to proclaim the Gospel. It is to engage in what Pope St. John Paul II called “the New Evangelization”.

As the people of God we are called to announce God’s great deeds by giving testimony to what God has done for us … how we have emerged from our former way of life into the light of Christ … how our faith transforms the way we think, the way we live, the way we treat others…

And isn’t that exactly what’s going on in 1st reading from the Acts of the Apostles.

All throughout the Acts of the Apostles (which we read in the Easter Season), we see the Apostles and indeed the whole Christian community boldly bearing witness to their faith in Jesus Christ, crucified and risen.

No one and nothing will stop them – not persecution, not disappointments, not personal weakness, not petty jealousies, not even divisions and rancor within the Christian community itself.

The disciples forged ahead, preaching and witnessed convincingly and so it was that the church began to grow and grow rapidly in a most inhospitable environment, namely, the far-flung Roman Empire.

So much did the church grow that the Apostles enlisted others to help them.

Today’s reading from the Acts of the Apostles is the Scriptural foundation for deacons who serve the church by serving the needs of the poor, by preaching the Word of God, and by assisting in the church’s sacramental life.

So too, presbyters, priests, were set apart to lead local communities.

Dear friends, the 150th anniversary of St. Thomas Aquinas Parish is a time to remember those who went before us who physically laid the foundations and built the church we see today.

And we do remember them with deepest gratitude – priests, religious, parish families, parish lay leadership – that gave of themselves so generously that we are here today. Let us indeed ask God to bless them and take them unto himself.

But let us also remember them by asking the Holy Spirit to come upon us so that we might know and experience the freshness of the Gospel, and to experience wonder at being called into God’s marvelous light.

Let us remember those who have gone before us by heeding the call of Pope Francis to encounter the afresh, by hearing the Gospel anew and by being filled with joy of knowing Jesus, so much so that, as a community of faith, we will experience what our Holy Father calls a missionary conversion – a faith and joy we cannot keep to ourselves but which we share with others – especially those who, for whatever reason, are disconnected from their faith.

Dear friends, as God’s holy people, may our very lives announce the praises of the Lord who called us out of darkness into his own wonderful light!”

May God bless us and keep us always in his love!