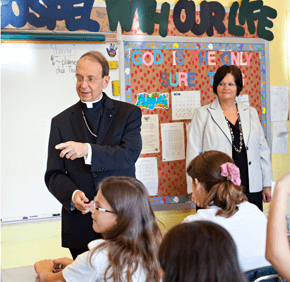 By Elizabeth Lowe
elowe@CatholicReview.org
Twitter: @ReviewLowe
CATONSVILLE – Patrick Ogden, a sixth-grader at St. Agnes School, did not sugar coat his response when Baltimore Archbishop William E. Lori asked him if he was glad to be back in school.
Patrick said he was not.
“This is what you call an honest man,” Archbishop Lori said, laughing.
Archbishop Lori visited the parish schools of St. Agnes and St. Mark, also in Catonsville, Aug. 27, the first day of the 2012-2013 school year and his first year with Catholic schools in the archdiocese.
Dr. Barbara McGraw Edmondson, superintendent of Catholic schools, visited the schools with the archbishop.
At St. Agnes, Archbishop Lori visited first-, sixth-, seventh- and eighth-graders. He blessed each class and was eager to know how students spent their summer vacations.
“I just came by to wish everybody a very happy school year,” Archbishop Lori said to 14 wide-eyed first-graders. “We’re so happy you are starting your education at St. Agnes.”
Patrick, the sixth-grader at St. Agnes, was thrilled that Archbishop Lori chose to visit his school.
“Meeting him face-to-face is a great honor,” said Patrick, 11.
Maribeth Bennett, a middle school teacher at St. Agnes, said “it’s exciting to start the year with the archbishop and the superintendent, and especially for the sixth-graders, since they’re new to middle school; it made their day extra special.”
Father Michael Foppiano, administrator of St. Agnes Church, told Archbishop Lori “it’s an honor to have been picked today.”
Susan Banks, principal of St. Agnes, said she yelled “guess who’s coming” when she learned of the archbishop’s visit.
At St. Mark School, Archbishop Lori blessed the students, teachers and staff and led a school-wide Hail Mary.
“I’m really proud of our Catholic schools,” Archbishop Lori said. “They are excellent schools in every respect.”
The archbishop told the students that this school year they “have the opportunity to be the young people God wants you to be.”
Mary Jo Warthen, principal of St. Mark, said the school community was “thrilled, there is so much excitement” about the archbishop’s visit. “He’s very personable.”
Copyright (c) Aug. 27, 2012 CatholicReview.org
PrevNext