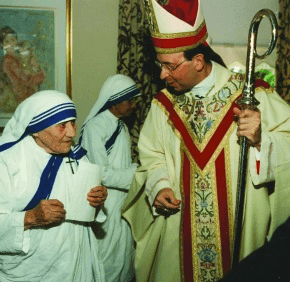 By George P. Matysek Jr.
gmatysek@CatholicReview.org
Twitter: @ReviewMatysek
Archbishop William E. Lori vividly remembers one of his earliest experiences with Blessed Teresa of Kolkata as an encounter with holiness.
Then a young priest of the Archdiocese of Washington, Archbishop Lori was present for a Mass celebrating the opening of Blessed Teresa’s new Washington home for single mothers and their children.
“She was sitting on the floor at the back of a simple chapel – all crumpled up, praying before the Blessed Sacrament before Mass began at the home on Wheeler Road,” Archbishop Lori remembered. “She looked so small and yet so absorbed in prayer.”
Serving as priest-secretary for Washington Cardinal James Hickey and then as an auxiliary bishop of Washington, Archbishop Lori would go on to meet Blessed Teresa many more times as the founder of the Missionaries of Charity expanded her ministry in the United States.
“She was someone who didn’t just simply do good things for the poor,” Archbishop Lori said. “She really had totally dedicated her life toward the works of mercy, toward seeking God’s mercy in her own life and then extending that mercy to others – most especially the poorest of the poor.”
Archbishop Lori will observe the Sept. 4 canonization of Blessed Teresa by celebrating special Masses.
On the day of Blessed Teresa’s canonization, the archbishop will celebrate a 10:45 a.m. Mass at the Basilica of the National Shrine of the Assumption of the Blessed Virgin Mary in Baltimore. He will also celebrate an 11 a.m. Mass for the Missionaries of Charity on Sept. 10 at St. Wenceslaus in East Baltimore.
Blessed Teresa, whose likeness is captured in a bronze bust at the basilica, visited the nation’s first cathedral in 1996 to accept the renewal of vows of 35 of her Missionaries of Charity. During that Baltimore visit, she also stopped at the international headquarters of Catholic Relief Services, the U.S. bishops’ international relief agency.
The Gift of Hope hospice for AIDS patients was established by Blessed Teresa in 1992 in the former convent at St. Wenceslaus, where it continues operating today.

Blessed Teresa visited the Archdiocese of Baltimore several other times, including twice to Mount St. Mary’s Seminary in Emmitsburg (where Archbishop Lori first encountered her when he was a seminarian in the 1970s). Blessed Teresa gave a 1975 lecture at what is now Notre Dame of Maryland University in Baltimore.
Archbishop Lori said Blessed Teresa lived the message of mercy with “great integrity.”
“She could talk to anyone about the mission of mercy,” he said. “It didn’t matter if you were a public official or a church official. She was meek and mild and merciful and gentle, but she was also fearless.”
Archbishop Lori said Blessed Teresa had a “beautiful way” of linking the truth of the church’s moral teachings with service for the poor and vulnerable. She was also a woman known to be hands-on in her ministry, he said, and “very direct in what she did.”
When Blessed Teresa was looking for a site to open an AIDS hospice in Washington in the mid-1980s, she wanted to choose the location herself. It was Archbishop Lori’s job to escort her on a “real estate tour,” he said.
“She ended up picking the headquarters for Catholic Charities of Washington, which was the one I had secretly hoped she would not pick because then we had to move Catholic Charities out,” he remembered. “Cardinal Hickey was very cheerful about it and did what had to be done to make it happen.”
As in Washington, the Baltimore AIDS hospice at St. Wenceslaus has been a “great blessing,” Archbishop Lori said.
“I’ve seen many pictures of Cardinal Keeler with his beautiful smile,” Archbishop Lori said, “but I think the nicest smile was reserved for the day the Gift of Hope was opened and he stood there on the steps of the convent with Mother Teresa and her sisters. What a grace to have the Missionaries of Charities in our archdiocese.”