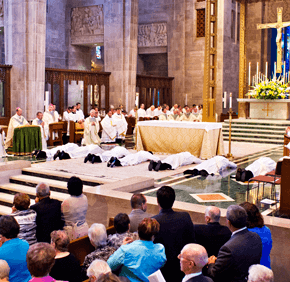 A half-hour before being ordained a priest, Jaime Garcia-Vasquez was overcome with emotion, crying as he translated from Spanish to English his parents’ thoughts.

“She (his mother) feels today she has accomplished her vocation,” he said.

Father Garcia-Vasquez, 28, was one of seven men ordained to the priesthood by Archbishop William E. Lori June 9 at the Cathedral of Mary Our Queen in Homeland during a two-and-a-half hour Mass.

Father Jason Catania, 40, Father Anthony Vidal, 52, and Father David Reamsnyder, 38, were ordained for the Catholic Ordinariate of the Chair of St. Peter – a jurisdiction established by Pope Benedict XVI to minister to former Anglicans.

They previously served as Episcopal priests at Mount Calvary Church in Baltimore, a former Anglican parish received into the Catholic Church in January.

Moments before the opening processional, Father Roth remarked to fellow priests during a quiet moment, “I can’t believe it’s here.”

In his homily, Archbishop Lori told the men to respond to the Lord, at all times, by saying, “Yes, Lord, you know that I love you.”

“Today, in this sacred rite of ordination, the Lord Jesus looks upon you, my dear brothers, called now to be priests of the church, and he asks you, ‘do you love me?,’” Archbishop Lori said. “For the priestly ordination you are about to receive requires a response of love, a love that you will show by the pastoral care you will offer God’s people, a love you will manifest by your spirit of loving communion with me and with your fellow priests, by your faithful proclamation of God’s Word and devout celebration of his mysteries, and by a life of daily, sustained prayer, all for the glory of God and sanctification of his people.”

The men were presented as candidates for ordination, then knelt before Archbishop Lori, placing their hands in his and promising to respect and obey the chief pastor of the archdiocese.

The faithful chanted the Litany of Saints as the seven men lay prostrate – and perfectly still – before the altar, signifying their dependence on God.

Archbishop Lori and nearly 100 priests laid their hands on the heads of the men, in an ancient gesture rooted in Scripture, signifying the conferral of the Holy Spirit.

The men were presented the stole and chasuble, signs of the priestly office. Their first blessing at the end of the Mass was to a beaming Archbishop Lori.

Archbishop Lori thanked Auxiliary Bishop Denis J. Madden, who was in the Diocese of Bridgeport for a diaconate ordination.

After Mass, the newly ordained greeted family and friends with wide smiles and hugs, offering blessings to many.

Father Catania, the rector of Mount Calvary, called the ordination “the end of a long journey.”

“While I’ve been through this before (as an Episcopalian), it’s different,” Father Catania said.

Fathers Vidal and Reamsnyder, both associates of Mount Calvary, are married with children.

Father Makovo, meanwhile, came to Baltimore from the Archdiocese of Mombasa in coastal Kenya, and Father Garcia-Vasquez is from Colombia. Father Cotter is a native Oklahoman who joined the U.S. Army as a chaplain assistant and served two tours in Iraq, and Father Roth is a native Pennsylvanian who taught from 2002 to 2008 at the University of Scranton and Marywood University, both in Scranton, Pa.

Father Cotter aspires to be a “joyous” priest.

“No matter what happens in life, I strive to by joyous, in any situation,” Father Cotter said. “Probably in particular, during those hard times when you’re ministering to someone who is dying, there’s still a joy and a peace to our faith.”

Father Steven Roth said his ordination is “really a mixture of many emotions.”

Lying prostrate “is awkward in itself but very powerful for me, very symbolic,” signifying being “vulnerable to God,” Father Roth said. “I have to be just absolutely defenseless and let him work in me and I think that’s what that posture really symbolizes for me.”

Father Roth’s mother, father and sister attended the ordination, in addition to several hundred from St. Margaret in Bel Air and his home parish in Scranton, St. John the Evangelist.

“Seeing all of those people, I’m humbled they’re making the effort to come,” said Father Roth, calling it “overwhelming.”

“Words can’t describe it,” she said.

Stan Roth, his father, said “it’s difficult to fully express the full feeling of happiness. You see our smiles but our hearts are bursting with joy.”

“It’s very special to know that you will be able to bring Christ to the people,” Father Makovo said, calling the Eucharist “food for our souls.”

Father Makovo’s mother and two sisters, who were denied visas, were back home in Kenya.

“I really, really would have been so happy to see my sisters and my mother, of course,” Father Makovo said. “It’s been a long journey.”

Friends from St. Matthew, Northwood; St. Joseph, Cockeysville; and Church of the Resurrection, Ellicott City attended the ordination. Patrick Nganga, a parishioner of St. Matthew, said Father Makovo brings “that richness from Kenya and that is a strength.”

Father Garcia-Vasquez was particularly happy that his mother, Mercedes, attended the ordination. She had missed his diaconate ordination in 2011 because she was being treated for stage-4 lymphoma.

During his diaconate ordination, Father Garcia-Vasquez remembers laying prostrate, praying for his mother, then getting up and “something happened,” he said.

“I felt at peace,” Father Garcia-Vasquez said. “I knew that my mom was going to be fine and it was almost like God told me she was going to be OK. I stood up and I was happy.”

That summer, his mother’s cancer was gone.

“I knew she was fine because I prayed to God,” Father Garcia-Vasquez said. “I’m very excited to have my mom here. … It humbles me and amazes me the graces of God, the good he has put in my life. I just want to thank God.”

Translating for his parents, Father Garcia-Vasquez said his mother, holding a small bouquet of red roses, was “extremely happy.” His father, Jaime, said “he knew from the beginning that one day he would be giving me to God.”

“He’s been praying from the bottom of his heart that I’d be a good priest,” Father Garcia-Vasquez said.

Monsignor Robert A. Armstrong, the former rector of the Cathedral who has known Father Garcia-Vasquez since he arrived in the U.S. in 2007, was overcome by emotion.

“He’s my boy,” Monsignor Armstrong said. “I’m very proud. It almost makes me cry. I think he’s in love with the church and the priesthood.”

To watch a slideshow of the ordination, click on the arrows below.