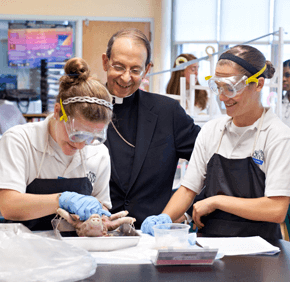 Eighth-graders at Holy Angels Catholic School in Baltimore had a special guest teacher in their religion class May 23.

One week after his installation as Baltimore’s 16th archbishop, Archbishop Lori made his first visit to two of the Archdiocese of Baltimore’s Catholic schools.

He spent more than an hour at Holy Angels Catholic School and Seton Keough High School, both in Baltimore, which share a school building.

Holy Angels opened in 2010 after 13 schools closed in the archdiocese earlier that year.

Archbishop Lori told the eighth-graders it is important to respect, worship and adore God.

“That’s what we should be doing,” Archbishop Lori said. “We should be adoring him.”

He visited most classrooms in both schools, pausing to greet nearly every student, teacher and staff member he met on the tour.

Archbishop Lori said he is working to “develop a personal and more experiential knowledge of the archdiocese and the only way to do that is bit by bit.”

He said one of his first impressions of the archdiocese is that “the Catholic faith is very strong here.”

During the tour, Archbishop Lori paused to pray a decade of the rosary with 14 kindergartners, bless a classroom, pray the Our Father with 15 first-graders and said a prayer in Seton Keough’s chapel.

“What a privilege to do this,” Archbishop Lori said after praying the rosary with the kindergartners.

Principal Kathleen Filippelli said Archbishop Lori’s visit to Catholic schools only one week after his installation “shows his care for and his love of Catholic education.”

“I know he’s going to be a good steward for us,” Filippelli said.

Nevaeh Lofton, a second-grader at Holy Angels, said she was surprised when Archbishop Lori started asking her class questions about what they’re learning in school.

“It’s so important to have someone we can feel is not only our shepherd but our advocate for education,” Calamari said.

Allison Clampitt, a sophomore at Seton Keough, was one of seven student ambassadors who took Archbishop Lori on the tour.

“I didn’t expect him to introduce himself to everyone,” Clampitt said. “I think it’s awesome he took the time to go into both of the schools.”