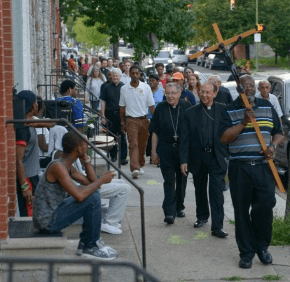 The Feast of St. Peter Claver Sept. 9 took on added significance in Baltimore.

The twinned parish originally named for the patron saint of slaves and ministry to African-Americans was host to a prayer walk and listening session led by Archbishop William E. Lori. The outreach represented the Archdiocese of Baltimore’s part in a nationwide Day of Prayer for Peace in Our Communities organized by the U.S. Conference of Catholic Bishops.

The parish of St. Peter Claver and St. Pius V is in the Sandtown-Winchester neighborhood, not far from where Freddie Gray Jr. was arrested in April 2015 and suffered fatal injuries while in police custody – the flashpoint in rioting that raised awareness of urban dysfunction in the center of the Premier See.

“Powerful,” was how Woo succinctly described the evening.

Following Deacon Willard Witherspoon, who carried the crucifix, more than 100 men and women, some requiring assistance, made three stops west of the church, where Ray Kelly, a parishioner of St. Peter Claver and director of the No Boundaries Coalition, described as many heinous acts of violence.

The first stop was on North Carey Street, where Antonio Addison, 22, was fatally shot in May. The second was outside New Song Worship and Arts Center on North Calhoun Street, where Addison’s funeral unraveled when his brother shot their father. Near the corner of Baker and Leslie, Kelly paused to tell of the July murder of Taymen Brown.

With a beautiful mural as their backdrop, members of the Prayer Walk for Peace make their final stop at the corner of Leslie and Baker Streets in West Baltimore Sept. 9. (Kevin J. Parks | CR Staff)

Returning to St. Peter Claver Church for a listening session, five speakers from as many parishes respectfully asked Archbishop Lori and the Catholic Church to advocate for them on a number of fronts, highlighting education and opportunity, including for ex-offenders, while noting the power of the church.

“The decrease in educational resources sustains the cycle of poverty,” said Enoch Attenoukon of St. Ambrose.

“The very first battle of the Civil War was fought here, and the Catholic Church provided refuge for soldiers making their way to the Fifth Regiment Army,” said JoAnn Williams, of St. Bernardine. “We’ve always been on the forefront.”

Jacquie Massey of New All Saints, talked of inequality and racism, and said, “We must not be afraid to act.”

Maureen Brown, of St. Peter Claver and St. Pius V, referenced the plague of the unchurched.

Cassie Boykin, of St. Gregory the Great, spoke of sacrifice, of the sixth-century pope, a former pastor and her current pastor.

“Our patron gave everything he had, and that’s what Father Damien did,” she said, of Monsignor Damien Nalepa, who died at his desk four years ago. “Now Father Jean-Pierre (Tambwe) has that desire.”

Enoch Attenoukon, right, a speaker at the Prayer Walk for Peace at St. Peter Claver and St. Pius Church, greets a parishioner from St. Bernadine Church prior to the start of the walk in West Baltimore Sept. 9. (Kevin J. Parks/CR Staff)

Other Catholic communities represented included the Cathedral of Mary Our Queen in Homeland, St. Mark in Catonsville and St. Matthew in Northwood.

The evening ended with a liturgical dance from Kiya Outlaw, a young parishioner of St. Peter Claver.

When the U.S. Bishops’ initiative was announced, Archbishop Lori sought the counsel of Bishop Madden, who has led more than 100 walks for peace since becoming an auxiliary bishop of Baltimore in 2005.

“I asked Bishop Madden, ‘should we have a big pontifical Mass, or a banquet?’ “ Archbishop Lori said, anticipating the response. “No, he said, ‘Let us do what we always do, walk, pray, and remember what has to happen to work for a brighter future.’ “

Trudy Scott, 55, a parishioner of the former St. Martin Church and now Transfiguration Catholic Community, where she does everything from lector to schedule hall rentals, is a veteran of many of those walks.

“We need peace in the streets, and the church’s presence may be the turning point,” Scott said. “We may get tired, but we can’t give up.”

Archbishop Lori: Department of Justice report should trouble all