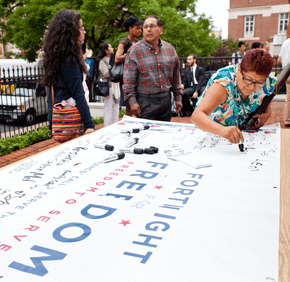 By Maria Wiering
mwiering@CatholicReview.org
BALTIMORE – The Eucharist conforms Catholics to “the pattern of Christ’s self-giving love” and compels them to see the dignity of the poor and perform acts of mercy, Baltimore Archbishop William E. Lori said at the June 21 opening Mass for this year’s Fortnight for Freedom. The Mass coincided with the feast of Corpus Christi.
“By entering the dynamic of Christ’s self-giving eucharistic love, we are impelled … to work for a loving and just society where the dignity of human life is respected from conception until natural death and all the stages in between,” he said in his homily.
More than 1,000 people packed the Basilica of the National Shrine of the Assumption of the Blessed Virgin Mary for the opening of the third annual Fortnight for Freedom, two weeks dedicated to prayer, education and advocacy for religious freedom.
Concelebrating the Mass were Auxiliary Bishop Martin D. Holley of Washington; Auxiliary Bishop F. Richard Spencer of the U.S. Archdiocese for the Military Services; Auxiliary Bishop Denis J. Madden of Baltimore; Bishop Mitchell T. Rozanski, an auxiliary bishop of Baltimore and bishop-elect of Springfield, Mass.; and a dozen priests.
To view a slideshow from the event, navigate the arrows below:
See a photo you would like to purchase? Click here.
Archbishop Lori is the chairman of the U.S. Conference of Catholic Bishops’ Ad Hoc Committee for Religious Liberty, formed in 2011. In 2012, it published a letter “Our First, Most Cherished Liberty” and launched the Fortnight for Freedom event in response to government infringement on religious freedom rights in the United States and abroad.
Chief among those perceived threats is the U.S. Department of Health and Human Services’ mandate that most employers, including religious employers, provide insurance for artificial birth control, sterilization and abortion-causing drugs. Archbishop Lori and the Archdiocese of Baltimore are among plaintiffs in 100 lawsuits nonprofit and for-profit organizations and businesses have brought against the federal government over the mandate.
In his homily, Archbishop Lori criticized the mandate, as well as state laws criminalizing churches that serve immigrants living in the country illegally and “discrimination against Catholic humanitarian services because they refuse to provide so-called ‘services’ that violate Catholic teaching.”
Archbishop Lori acknowledged that in other countries, people are killed for professing their faith. In the United States, he said, the challenges to religious freedom are more subtle yet “very real.”
“Increasingly, government at all levels is asserting itself in the internal life of churches, telling them that houses of worship are fully religious, whereas religious schools and charities that serve the common good are less so, and therefore less deserving of religious freedom protections,” he said.
The 2014 Fortnight theme is “The Freedom to Serve” to emphasize the charitable works of Catholic organizations and individuals. During the Mass, Archbishop Lori distinguished the church’s work from that of non-governmental agencies, as Pope Francis has done, adding that Catholics “are to be more than an NGO” by virtue of a “eucharistic heart.”
“We are seeking for the church and for church institutions no special privileges,” he said. “We are seeking the freedom to serve, or as Pope Francis once put it, the freedom to proclaim and live the Gospel ‘in its entirety.’”
He asked Catholics to keep “in the forefront of our hearts” people whom U.S. Catholic humanitarian agencies, parishes and individuals serve.
“Let us look at them not merely as statistics but as persons created in God’s image and called to enjoy friendship with God,” he said.
Catholic parishes and organizations throughout the country have planned events celebrating religious freedom and charitable works to coincide with the Fortnight. In addition to participating in these events, Archbishop Lori urged Catholics in the Archdiocese of Baltimore to take “The Freedom to Serve Pledge,” found at archbalt.org.
Among the Mass’ attendees were members of the Baltimore-based Little Sisters of the Poor, plaintiffs in a well-publicized lawsuit against the federal government over the HHS mandate. The U.S. Supreme Court granted the sisters a temporary injunction in January.
In an interview after Mass, Mother Loraine Marie Clare Maguire, the Little Sisters’ provincial superior, urged Catholics to pray for religious freedom.
“Religious freedom is very important to us and to our mission of caring for the elderly,” she said. “You can’t do anything without prayer, and the Eucharist is the summit of our prayer life. It’s what brings us together as a community to pray.”
The Fortnight for Freedom will culminate with a July 4 Mass at the Basilica of the National Shrine of the Immaculate Conception in Washington, D.C.
Also see:
Bishop Rozanski’s parents nurtured his faith
Mothers reflect on sons’ vocations to the priesthood
PrevNext