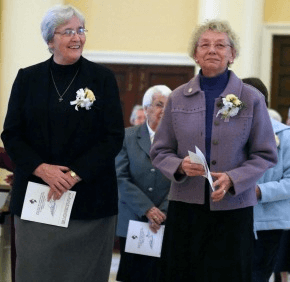 The Basilica of the National Shrine of the Assumption of the Blessed Virgin Mary in Baltimore was crowded Feb. 1, for a Mass celebrating not only World Day for Consecrated Life, but also the Archdiocese of Baltimore’s start of the 2015 Year of Consecrated Life.

In his homily, Archbishop William E. Lori recognized that, scattered among the members of various active and contemplative religious orders in the pews, were parishioners who might not completely understand the meaning of “consecrated life.”

He described the “vocation of men and women who have heard and answered the call to follow Christ more closely” and to lead a “more intense life of discipleship” through the vows of poverty, obedience and chastity.

“You live in such an (authoritative) way that you show all of us how to make the Lord’s kingdom the first priority,” Archbishop Lori said.

He was relating the second reading, from First Corinthians, and the Gospel of Mark to ways in which those who choose the vocation of religious life embark on an “exodus from self” and worry more about what Mark calls “the things of the Lord” instead of the “things of the world.”

The Year of Consecrated Life, which opened worldwide Nov. 30, will close Feb. 2, 2016, the feast of the Presentation of the Lord. According to Catholic News Service, Pope Francis called for a “yearlong observance dedicated to renewing hope in religious life and instilling it more profoundly with a prophetic witness of the Gospel.”

Marianist Father Richard V. Kuhn, 86, among those celebrating a jubilee (his 65th) at the Mass, described himself as “semi-retired” and a “priest at large, open to requests,” observed that one reason for declining vocations was a “gap” between clergy and laity.

“Openness on the part of the clergy helps to bridge that gap,” Father Kuhn said.

He recognized Father Michael White, pastor of Church of the Nativity in Timonium and one of his students at the former Cardinal Gibbons High School, where Father Kuhn taught, as a good model of the welcoming attitude and humility needed to be able to reach today’s youths and adults.

Likewise, Xaverian Brother Lawrence Harvey, 53, said that it was partly the “relational” manner of the brothers who taught him at Malden Catholic High School in Massachusetts that led him to consider his particular order when he was 18.

The director of mission advancement for the Xaverians in Baltimore acknowledged that many still do not understand the concept of a religious brother.

“The way of life of a brotherhood is not easily understood because we’re not priests, (and) we’re not lay people either,” Brother Lawrence said. “We’re called lay religious.”

Franciscan Sister of St. Joseph Carol Clare Czyzewski, 71 and celebrating her 50th jubilee year, took note of the progress made since Vatican II with regard to the laity.

“People can serve in a role that only sisters or brothers used to serve in,” said Sister Carol, director of adult faith formation at St. John the Evangelist in Hydes. “(Laity are) serving in ways that were never imagined before.”

The Mass was followed by a dinner at Archbishop Borders Hall in the Catholic Center. Two celebrations for those celebrating jubilee years will be held in the spring, one in the Neumann Vicariate, one in the Seton Vicariate.