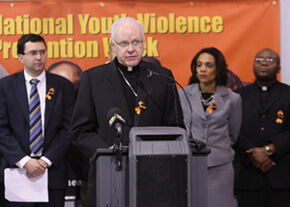 Catholic schools educate children, Catholic and non-Catholic alike, from every part of the city, the archbishop said. They provide a quality, values-based education that “literally changes the direction of their lives.”

“It is our mission to get to these children before the drug dealers do,” he said, “and we won’t stop until we graduate every child in our schools.”

“To those who wish to scare us into closing these sanctuaries of hope, I say: We are not going anywhere,” he said.

Mayor Dixon praised the Catholic Church for “standing at the forefront” of efforts to reduce violence in the city. St. Veronica, St. Wenceslaus and St. Ann host a new program called Operation Safe Streets, which encourages peacemaking in some of the most violent areas of the city.

“As long as we continue to work together, we can make a difference – but we can’t make excuses and we can’t just think it’s somebody else’s responsibility,” Mayor Dixon said. “It’s all of our responsibility.”

The mayor noted that a series of leadership training programs and other youth activities will be held throughout the city during Youth Violence Prevention Week.

Cathy McClain, a St. Veronica parishioner who heads the Operation Safe Streets program based at her parish, told The Catholic Review that the Safe Streets effort is having a profound impact in Cherry Hill.

Since it was launched in September, there have been no shootings or killings in Cherry Hill – a marked contrast to the previous eight months which saw 14 people shot or killed, she said.

“That speaks volumes about how effective the program has been,” she said.

Safe Streets works because it employs outreach workers who come from the streets, she said.

“They are the ones who have the most authority with their peers,” Ms. McClain said. “We’ve had times when a gang has been involved in a confrontation and our outreach workers have diffused the situation so there’s no bloodshed.”

“Violence is not how you solve problems,” he said. “That’s the message we’re trying to spread.”