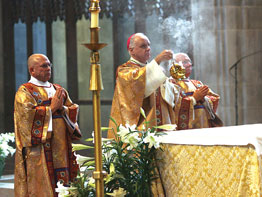 Looking out at a congregation dressed in brightly colored dresses, Easter hats and suits, Archbishop O’Brien said, “This day breathes of life.”

“In Christ’s resurrection, new hope is given,” he said.

The archbishop noted that discrepancies are to be expected among the various Gospel accounts of Jesus’ resurrection, “especially with a story so stupendous,” but said, “This is a Christ-given opportunity to stir up the fire of the Holy Spirit.”

“Too many stones are obstructing too many hearts,” the archbishop said during his homily, referring to stones of worry, fear, racism, terrorism, lingering hatred and jealousy.

“How many Calvaries are within miles of here?” the archbishop asked.

He encouraged Catholics to spread the Easter message, not by “empty words,” but by good deeds. He cited the work of Catholic Charities and pregnancy centers as hopeful examples.

“It was beautiful,” said Cathedral of Mary Our Queen, Homeland, parishioner Ginny Karr of the Easter Mass.

Mary Ellen Russell, who attended Mass with her husband and daughter, said the archbishop’s homily was “very timely – very aware of what’s going on in the world and yet rising above it.”

It was her first time attending a Mass celebrated by the archbishop, and her impression was that “he seems very friendly.”

“He seems very attentive and very accessible,” said Ms. Russell (not of the Maryland Catholic Conference).