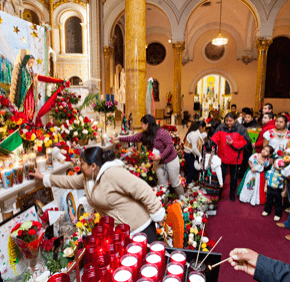 By Catholic Review Staff
GLYNDON – Many parishes throughout the Archdiocese of Baltimore observed the feast of Our Lady of Guadalupe Dec. 15.
At Sacred Heart in Glyndon, that celebration on the third Sunday of Advent included Archbishop William E. Lori, who said the feast reminded him of “our responsibility today in the new evangelization.”
The actual feast day, Dec. 12, marks the Virgin Mary’s appearance to Juan Diego on Mexico City’s Tepeyac Hill in 1531, when she appeared to the peasant, which led the local bishop to build a church on that site.
That miracle is considered pivotal to the growth of the church in Latin America. Our Lady of Guadalupe is the patroness of the Americas.
In the opening procession, the Knights of Columbus led dancers – adorned in traditional clothing such as peacock-feathered headdresses – altar servers and clergy into the church, while the Hispanic choir sang and parishioners clapped.
Hymns, in Spanish, included “O Come, O Come, Emmanuel.” The musical accompaniment included parishioners such as guitarist Angel Ramirez.
Watch and listen as parishioners of Sacred Heart of Jesus/Sagrado Corazón de Jesús in Highlandtown  sing “Las Mañanitas” and place flowers and light candles in front of the church’s statue of Mary Dec. 12.
Listen to audio of the event here.
Rogelio Salas, another parishioner, described Archbishop Lori’s homily, which emphasized the unity of Catholics in the faith, as “very beautiful, very marvelous.”
“From our Blessed Lady’s appearance to Juan Diego, the Catholic faith spread in such great ways that we continue to be inspired by this great evangelization,” Archbishop Lori said in his homily. “From the hill of Tepayac, throughout the country of Mexico, through Central, South and North America, the message of Our Lady continues to inspire us.
“Isaiah speaks of the wonders that happen when we truly follow the ways of God. Our Blessed Lady and Juan Diego are prime examples of the marvelous things that happen when we respond to God’s call. How blessed we all are to be Guadalupinos!”
At the conclusion of Mass, the archbishop was presented with a painting of Our Lady of Guadalupe, St. Juan Diego and Blessed Pope John Paul II. He said he was “deeply touched” by the gesture, as he had attended the beatification of Juan Diego in 1990.
Concelebrants included Monsignor Lloyd E. Aiken, pastor of Sacred Heart.
“It’s a stamp of approval on the people of the New World that God embraces them with the same love through the one faith,” Monsignor Aiken said prior to the Mass. “It’s more than just offering a Spanish Mass, it’s giving the Hispanic community an opportunity to participate in the life of the parish community and to be fed in different ways, beyond the Eucharist.”
“This is a big day for the mother (of) Jesus,” said Octavio Colin, whose son was invited to play in the band as part of the after-Mass celebration “It’s very special for us to come here. We cannot explain (how much the Mass meant) because it’s in my heart.”
Colin and his family worship regularly at Sacred Heart of Jesus/Sagrado Corazón de Jesús in Highlandtown, which held a novena to the Virgin of Guadalupe from Dec. 3 through Dec. 12, with some observances at St. Patrick in Fells Point.
On the Dec.12 feast day, prior to 6 a.m. Mass in Highlandtown, parishioners gathered at 5 a.m. to sing “Las Mañanitas” and place flowers and light candles in front of the church’s statue of Mary.
Also see:
Father Carter, Navy chaplain and pastor, dies at 71
Blog: A memorable encounter regarding a young woman and the rosary
PrevNext