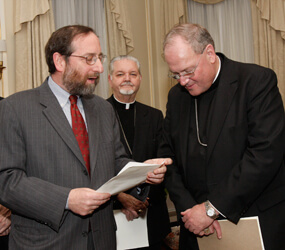 Cardinal Francis E. George of Chicago, USCCB president, made the appointment, which is effective Nov. 11 and is for five years.

In announcing the appointment Oct. 23, Cardinal George noted the New York Archdiocese’s “long history of cooperation and friendship between Catholics and Jews.”

“Since the Second Vatican Council, important strides in this relationship have been made through dialogue and collaboration in countering racism, anti-Semitism and other offenses against human dignity,” Cardinal George said in the letter of appointment.

“Our episcopal conference, through the leadership of your predecessors in New York, and especially through the tireless and generous service of Cardinal William Keeler, has sought to contribute to the work of reconciliation between the church and the Jewish people after centuries of mutual estrangement,” he told Archbishop Dolan in the letter.

“While we look back with gratitude on nearly a half-century of progress in these efforts at healing and renewal, we also know that important and pressing challenges lie ahead for us,” the cardinal added.

Cardinal George said news of the appointment will be appreciated by all of the U.S. bishops and by members of the Jewish community who have come to know Archbishop Dolan as a good listener and faithful interpreter of the historic ties binding together the two communities.

“Above all else,” Cardinal George said, the Jewish community will find Archbishop Dolan to be “a friend who communicates the joy of his own faith, while at the same time conveying profound respect for the spiritual gifts of the other.”

Archbishop Dolan will join Cardinal Keeler Nov. 11 for the semi-annual USCCB’s consultation with the National Council of Synagogues. That will be the last Catholic-Jewish meeting at which Cardinal Keeler will serve as co-chair.