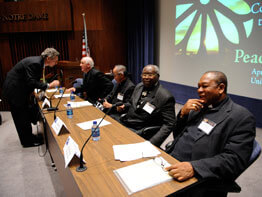 NOTRE DAME, Ind. – Archbishop Evariste Ngoyagoye of Bujumbura, Burundi, came to the Conference on the Future of Catholic Peace-building with a story of Catholic engagement that brought about peace in Burundi. He left with a renewed sense of the vigilance necessary to maintain peace and justice in his country.

“We weren’t sufficiently vigilant during this period,” Archbishop Ngoyagoye told Catholic News Service through an interpreter at an interview during the conference, where he was reminded of a U.N. warning that up to half of the regions emerging from war return to war within five years.

The April 13-15 conference at the University of Notre Dame, aimed at articulating a Catholic theology and ethic of peace by bringing together academics and on-the-ground peace builders, will lead to revisions in the agendas at an upcoming bishops’ conference meeting and diocesan synods, he said.

“It’s very important that from beginning to end there be clarity of purpose,” Archbishop Ngoyagoye said, noting he’ll be careful to identify the audience, adapt the message to different levels of the population and engage a broad base in the synods.

He said he also will focus on relationships between truth and the history of violence, justice and forgiveness, and reforms in the judicial system as well as monitoring the effects of international debt relief for the country, making sure money goes to the people.

Burundi, which started working with the U.S. bishops’ overseas aid agency Catholic Relief Services and the U.S. Conference of Catholic Bishops in 2004, hosted a Catholic Peacebuilding Network conference in 2006.

“We were a state that was emerging from conflict,” Archbishop Ngoyagoye said. “They were there to witness this moment and to be a support to us as the country emerges from war. We now are living much more securely.”

Bishops issued two pastoral letters ahead of time urging voters to participate in the elections without violence and to choose candidates according to the best interests of the country.

“The church would give moral credibility and also monitoring to make sure the elections went well,” he said, adding that the country is 65 percent Catholic.

“This is unique to Burundi in a sense. There were no other credible institutions in the country,” said the archbishop.

“Because of the history of the church’s engagement with trying to encourage the government to act correctly and serve the people, the church could bring a moral voice and guarantee the election would be honest, be transparent. It’s respected throughout the country,” he added.

The United Nations, the European Union, the United States, the African Union and neighboring states are helping establish political, security and economic stability in Burundi. Human rights groups and the media, including 10 new radio stations, also contribute to progress.

“When you’re submerged in the ongoing crises, it’s very difficult sometimes to get a larger picture,” he said. “When we are submerged or plunged into it, it’s very hard for us to step back from that and see what might be possible for us.

“We can see what are some of the possibilities for longer-term transformation. You’re responding to a crisis one day at a time. You get a larger view,” the archbishop said.