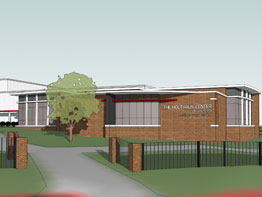 To kick off Archbishop Curley High School’s capital campaign, Father Michael Martin, O.F.M. Conv., stepped up to the microphone on April 25 to tell a story about his grandfather’s vision.

Some 100 friends, alumni and potential donors listened as the president of the Baltimore school recalled his youth, when his grandfather delivered milk, eggs and cheese for a local company after the Depression forced him to give up his own farm.

The satchel represented not only a gift, but also touched on his grandfather as a visionary.

“My grandfather saw something that was important, and he passed it on to future generations,” said Father Martin, his back to a flower garden and tree-lined walkway overlooking Lake Roland, while at the home of Paul Winicke, a 1974 Curley graduate, and his wife.

“That’s what we have here tonight,” said Father Martin, as he put Archbishop Curley’s campaign, “In Giving We Receive – Curley’s 50th Anniversary Building Campaign,” into perspective. “We want to pass our experiences and our Curley values on. They are so powerful, meaningful, important and life-changing.”

Father Martin and Gerry Holthaus, a 1967 Curley graduate and chairman of the building campaign, have been on the move, quietly driving this campaign into high gear and securing commitments in the amount of $4.2 million, more than half of the initial $7 million goal.
Leading the charge, Mr. and Mrs. Holthaus have donated $1 million to the school in support of the campaign. It is the largest single contribution in the history of Archbishop Curley High School.

“We are grateful to Gerry and Connie Holthaus for their significant gift to Archbishop Curley High School,” said Father Martin. “They have demonstrated tremendous generosity by investing in the future of our school in this way. Their gift will undoubtedly make a difference in the lives of our young men.”

The focus of this campaign, which continues through Nov. 1, is to meet the emerging needs of current and future students by addressing three key areas: infrastructure, arts and athletics. An additional $4 million will provide the athletic department with an indoor practice facility as well.

When the fundraising goal is met, the school plans to construct an elevator in the main school building, complete an internal roadway project, install turf in the stadium and begin a reorientation of the baseball diamond.

The main feature of the campaign, however, will be the construction of a new center for the arts to house the school’s award-winning instrumental and choral music programs, fine arts programs and various co-curricular activities.

This is the second capital campaign in the school’s history. The first raised nearly $3 million for the school’s endowment and concluded in 2005. The new campaign builds upon the work of that earlier effort and has already surpassed those previous fundraising records. Currently more than $4.2 million has been pledged to this capital campaign.

“We are pleased with the early success we have witnessed and are thankful to those who have provided these early leadership gifts,” remarked Barry Stitz, vice president for advancement. “These gifts and those received in the future will have a lasting and permanent impact on our school community.”

“This is an exciting time for the entire Archbishop Curley High School family,” said Father Martin. “Together, we share a clear vision for the future. We are committed to providing for the emerging needs of our students, who come here to experience a Catholic education in the Franciscan tradition. We are blessed to be supported in our mission by the talented and generous members of our school board and campaign committee who remain committed and faithful to the ideals of our school.”