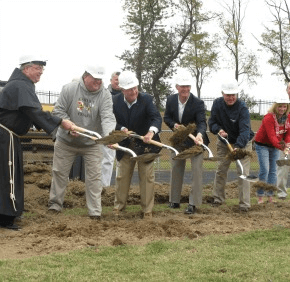 With an eye toward enhancing the marketability of the school as well as the experience of current student-athletes, Archbishop Curley High School in Baltimore has broken ground on a new synthetic turf athletic field.

Just prior to its Oct. 24 homecoming football game – in which the Friars would crush the Crusaders of St. Paul’s School in Brooklandville, 28-3 – Curley administrators joined Archdiocese of Baltimore officials and donors in putting shovels to earth.

“This is just a great day for Archbishop Curley,” said James Sellinger, archdiocesan chancellor for education. He added that a turf field would put the all-boys school “on par” with area schools currently boasting top-notch athletic facilities.

“The students deserve it, the community deserves it, and thanks to the Cal Ripken, Sr. Foundation, Lewis Contractors and all the others that made this happen,” Sellinger said, referencing a couple of the corporate donors to the $1.25-million project.

Other donors included Susquehanna Bank and the GCCB Foundation.

Frank Savarese, chairman of the Archbishop Curley School Board, said that decisive contributions had come from school alumni.

“We’ve been talking about the field for a long time, but raising the funds to make it happen is a challenge for any private school,” he said.

Savarese said that the synthetic turf field, which will be used for football, soccer and lacrosse, cost just under $1 million. The remaining funds, he said, will pay for “other amenities,” including fencing to secure the field and laying groundwork that would allow for a “phase 2” – a new track surrounding the field.

In the Maryland Interscholastic Athletic Association, Curley competes in the A Conference in soccer and track and field, and in the B Conference in football and lacrosse.

“Right now the field is a really big step for us and the school, and we’re all really excited about it,” Savarese said, adding that the school hopes to complete it in time for lacrosse season in the spring.

Christopher Cosentino, archdiocesan associate superintendent for secondary schools and government programs, noted that the turf field is consistent with the stated goal of “educating the whole child,” which includes the athletic experience.

Conventual Franciscan Father Donald Grzymski, school president, said that the field will be more durable and will hold up to both football and soccer uses during the fall.

Archbishop Curley follows other Catholic high schools which have added turf fields in recent years, including Maryvale Preparatory School in Lutherville and Mount de Sales Academy in Catonsville. The Seton Keough High School in Baltimore will make use of the new one at the neighboring Gibbons Commons.

At the ground-breaking ceremony for Archbishop Curley, Father Grzymski prayed for the safety of the workers who will construct the field as well as the students who will use it and “always compete with sportsmanship.”