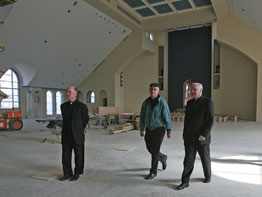 LIBERTYTOWN – As workers installed ceiling lights, prepared walls for a coat of paint and erected a sanctuary platform on what was a bustling construction site April 10, Archbishop Edwin F. O’Brien got a sneak peek of the new St. Peter the Apostle Church now rising in Libertytown.

Ignoring the friendly advice of a worker who warned the archbishop that his black clerical garb would get dirty in the dusty structure, the archbishop stepped carefully between stacked planks and large equipment to marvel at the emerging house of worship.

The new church will replace a 133-year-old brick structure that was destroyed in a 2004 fire. It incorporates a historic tower that was damaged in the blaze but left standing.

The archbishop made St. Peter his first stop on a daylong tour that later took him to St. Timothy in Walkersville, St. John the Evangelist in Frederick, Visitation Academy in Frederick, St. John Catholic Prep in Frederick, St. Joseph-on-Carrollton Manor in Buckeystown, St. Ignatius of Loyola in Ijamsville and St. Michael in Poplar Springs. He was joined by Bishop W. Francis Malooly, western vicar, and Deacon Charles Hiebler.

Archbishop O’Brien is nearing the end of his mission of visiting all 151 parishes in the archdiocese.

Pointing to large Stations of the Cross hanging from the walls of the new church, Monsignor John Dietzenbach, pastor of St. Peter, told the archbishop the cherished religious artwork was recovered and restored after the fire. Pieces of stained glass broken in the fire will also be incorporated into a special window in a perpetual adoration chapel in the new church, Monsignor Dietzenbach said.

The new church will seat 800 – well more than twice the capacity of the destroyed church, the pastor added. It is expected to be dedicated in September.

In comments at the end of a Mass celebrated in the parish hall before he toured the new church, Archbishop O’Brien praised St. Peter parishioners for their dedication.

“That structure across the street is a sign of your great hope for the future of the parish,” said Archbishop O’Brien, gesturing in the direction of the new church.

The archbishop said he was impressed by St. Peter’s devotion to the Eucharist. He pointed out that two of the seminarians currently preparing for the priesthood for the Baltimore archdiocese are from St. Peter, crediting perpetual adoration as one of the main reasons the Frederick County parish is producing religious vocations.

The archbishop pledged to “do anything and go anywhere” to promote vocations.”

“He’s a man young men are going to follow,” said Mr. Misulia. “We’re praying for him.”

Before leaving St. Peter to tour other parishes, Archbishop O’Brien visited the community’s small perpetual adoration chapel and knelt in prayer in front of the exposed Blessed Sacrament.