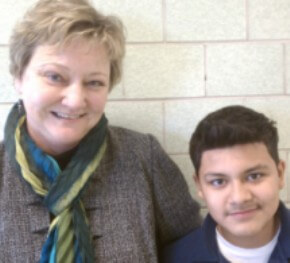 It’s a short five blocks and a world away – just on the other side of Eastern Avenue – from Our Lady of Pompeii Parish to Sacred Heart of Jesus. And Archbishop Borders School – pre-K through eighth grade – will be packing up this summer to make that journey.

“Crossing Eastern Avenue is (psychologically) huge,” principal Cathy Marshall said of a journey not unlike the one many of her students took from Mexico and Central America to the United States; from an area of need to one of plenty.

Added the 56-year-old principal, a former Dominican nun: “Of all the Catholic schools in the archdiocese, I probably have the highest percentage of families in need.”

The move – from Pompeii at Claremont and Conkling streets south to Sacred Heart at Foster and Highland avenues– is part of the ongoing concentration of the archdiocese’s Hispanic ministries at Sacred Heart of Jesus. Those ministries moved to the landmark, historically German-American parish in August 2011.

“The church is not only trying to strengthen its commitment to Latinos, but the new location gives us greater ability to grow,” said Marshall, noting that the Hispanic population at the Borders School has grown from 3 percent in 2002 to 56 percent in a decade.

With the growth of Baltimore City charter schools in the East Baltimore area, enrollment at Borders has fallen. Last year Marshall counted some 160 children in her classrooms.

There are currently 128 students at Borders – the lowest number since the school was founded at St. Elizabeth of Hungary in 2002 – and almost all of them qualify for the federal government’s free lunch program.

Though only three of her students pay the full $4,800 a year sticker price at the Borders School, dollars are scarce in the immigrant community – as well as in the African-American community that makes up 34 percent of the student body.

“Whatever we do, we have to do it well,” Marshall, said. “We have to step up the game.”

Archbishop Borders became the first dual-language school in the archdiocese in the fall of 2010, as it aims to make students fluent in Spanish as well as English.

Marshall is hoping that an open house at the new location later this month – a chance to show off a bigger physical plant at Sacred Heart along with a playground (as opposed to the current parking lot for recess), auditorium and closer proximity to the neighborhood Pratt Library – will attract more families.

“We’ll be next door to the new southeast public library – a huge asset,” said Marshall, who currently soldiers on without an on-site librarian.

“We see many teachers coming in to borrow books to share in their classrooms or to help their students with assignments,” said Cindy Kleback, manager of the Pratt’s Southeast Anchor Library – the one with the Frank Zappa statue – at Eastern Avenue and Conkling Street.

“It’s tough (on many teachers) because some schools do not have a full-time librarian or their libraries have materials that are out of date,” said Kleback. “We’re happy that we can help fill that gap – that’s what we’re here for. They just need to let us know.”

June 8 is the last day of class this year at the Borders School. Marshall has told her staff that everything needs to be packed up by July 30, because the next day – Aug. 1 – they move to Sacred Heart.

The future, said Marshall, is both challenging and bright.

A cradle Catholic from the Protestant stronghold of Tennessee, Marshall believes in the Hispanic culture permeating East Baltimore as much as older Baltimoreans cherish the traditions of the Poles and Italians who preceded Spanish-speaking families in Highlandtown.

“Latinos,” she said, “are going to save the church in this country.”

Marshall has seen that dynamic.

“Families used to choose our school because it was safe,” Marshall said. “Now, for the first time, the primary reason they are choosing it is because it’s Catholic.”

Parents and Guardians of prospective students are invited to tour the new school building, including classrooms. All teachers and staff of the Borders School will be on hand to discuss programs for the 2012-2013 school year.