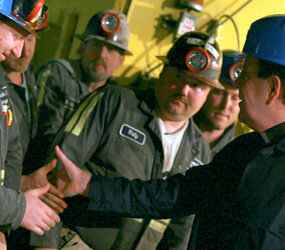 The archbishop blessed a newly crafted statue and shrine to St. Barbara, the patroness of miners, at the base of the hoist – the only portal in or out – at the Detroit Salt Co. on the city’s southwest side, Michigan’s lone rock-salt mine.

“We must be disposed and appreciate what this means,” Archbishop Vigneron told a group of about 30 miners. “When the church blesses a statue for people to use, to pray at, we do this because when we look at this statue we see somebody who followed Christ. And we, like that saint, will seek to please Christ.

“Those saints are our friends. They pray for us; they remember us and help us with their love,” he said.

Emanuel Manos, company vice president, was inspired to create the shrine after a trip to visit his family in Slovakia in 2008. He met Jan Martinka, a master woodworker, in Rajec, Slovakia, and asked him to make the statue.

Manos said that, unlike mines in America, mines in Eastern Europe have shrines to St. Barbara as the norm.

“This is a common thing in the European mines, to wear our faith on our sleeves,” he said. “As miners, it’s hard enough to come underground and to come up from a day’s work. In all our lives we need God, and this will be a reminder that we can pass on some of our problems to this lady who is at the throne of God in heaven.”

He said that he hopes the shrine will foster togetherness among miners, the majority of whom are Catholics.

“I think it’s just a reflection of that (togetherness),” Manos told The Michigan Catholic, newspaper of the Detroit Archdiocese.

As the shrine was nearing completion, Manos floated the idea of having a blessing ceremony with Archbishop Vigneron to Father Ed Zaorski, pastor of SS. Andrew and Benedict in Detroit, whose parish rests 120 stories above the mines just south of the River Rouge.

With the archbishop’s consent, Father Zaorski put the plans into motion.

Archbishop Vigneron told the miners the shrine should serve as signal to all who see it.

“I hope that every time you see this statue as you come to work, I hope it’s a reminder to you that you can live in a way of holiness,” he said, adding that men and women do not have to be in a convent or monastery “to be holy.”

“God wants all of us to be holy, and you can live a life of holiness as you work in a mine,” he said. “You can do God’s will; you can glorify him by the integrity of your work, the hard work you offer, and the justice by which you treat one another.”

Several miners lit candles, prayed and had their pictures taken in front of the shrine after the ceremony.

“In Poland, we have a big holiday for her. Every day I go to work, I know she’s with me,” said Jozef Kustrzyk, 62, a Polish-American who has been on his current job in the mine for only a few months.

Knight Lor, 31, an American of Hmong descent, said the shrine is a blessing regardless of religious affiliation.

“There’s only one God,” he said. “I have faith in this, and I know it will help me in the long run.”

Pete Graham, director of mining at the Detroit Salt Co., said the ceremony will engender even more closeness in an already tight-knit group of miners.

“I’ve been doing this for probably 40 years and this is the first time I’ve had this kind of experience; this is special,” Graham said. “I think this just brings us closer together as a family.”

Janette Ferrantino, owner of Detroit Salt, accompanied Archbishop Vigneron on a short tour of the mine, which encompasses more than 1,500 acres over 100 miles of roads. She was comforted by the turnout of her crew.

“I was very touched, it was a solemn and touching moment for me,” she said. “I just feel really proud of the people who work here that their faith is so important to them.”