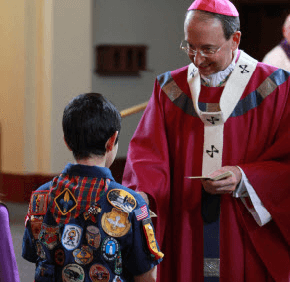 By Maria Wiering
mwiering@CatholicReview.org
Twitter: @ReviewWiering
MANCHESTER – “All loyal and faithful sons and daughters of the church are faithful sons and daughters of their country,” Archbishop William E. Lori said in a homily March 3.
He was speaking to about 250 Boy Scouts and Girl Scouts, troop leaders, parents and families who attended the Annual Scout Mass, held this year at St. Bartholomew Parish.
The Mass was organized by the Archdiocese of Baltimore’s Catholic Committee on Scouting.
Archbishop Lori, a former Cub Scout, called Scouting a “formation in faith, in values, in preparedness and in patriotism” and expressed his admiration and gratitude for Scouting programs.
At the end of Mass, the archbishop and Monsignor Thomas L. Phillips, Catholic Committee on Scouting chaplain, presented religious awards to Scouts and leaders. More than 350 Scouts received religious emblems in 2012.
Among them were Zach Kimball, 14, and Brady Lamas, 13, members of Boy Scout Troop 564 at St. Margaret in Bel Air. They were among the 34 Scouts who received the Ad Altari Dei emblem, which means “to the altar of God” and recognizes completion of a class on the sacraments.
“It’s important because I have to learn more about the church,” said Kimball, a Scout since first grade.
Connecting the annual religious awards to a Mass reminds participants that Scouting is founded on God and Country, said Monsignor Phillips, pastor of St. Gabriel in Woodlawn and Scout chaplain for 18 years.
“Every Scouting event is supposed to have a prayer service,” he said. “(It’s) knowing that God is present in our lives. When you’re out in the woods in nature, and you see all of the wonders that God has created – all the animals, the plants, the trees, the sky – all that stuff comes into play.”
The Mass highlighted the role of faith in Scouting for Hattie Wheeler, 34, whose sons Benjamin, 10, and Maddox, 8, joined Cub Scout Pack 665 at St. Bartholomew this year.
“There’s a lot more of a religious base to (Scouting) than I thought there was,” said Wheeler, a Methodist who said her family attended the Mass to show support for Scouting and their pack.
The Catholic Committee on Scouting also awarded 12 adult awards, including a St. George Emblem to Archbishop Lori. The award is a national honor for contributions to the spiritual development of Catholic youths through Scouting.
“The award is a recognition of the work of the whole archdiocese in promoting Scouting,” Archbishop Lori told the Catholic Review after the Mass.
“(Scouting) is an aid to young people and the practice of their faith,” he said. “It helps them to develop leadership qualities and virtues that will serve not only them but the church and our society well in the future.”
He added: “Many times when you meet Catholic leaders and you ask if there’s a history of Scouting, usually you find there is.”
The Catholic Committee on Scouting plans to award a Silver Buffalo Award to Cardinal William H. Keeler, archbishop emeritus of Baltimore, April 12. The highest national honor, the Silver Buffalo recognizes a person’s extraordinary service to youth.
Copyright (c) March 5, 2013 CatholicReview.org
PrevNext