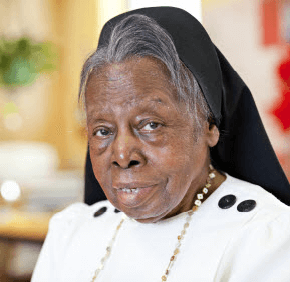 Sister Mary Charlotte Marshall, an Oblate Sister of Providence, spends two days per week at St. Gregory the Great, West Baltimore, as the parish’s director of evangelization, and plans to begin a new part-time position at St. Ambrose, Park Heights, in adult catechesis.

She is 85 – nearly two decades past 67, the age when most Americans expect to retire, according to an April 2012 Gallup poll – but has no immediate plans to quit, she said.

Sister Mary Charlotte is among the 34,000 senior Catholic sisters, brothers and religious order priests who benefit from the U.S. Conference of Catholic Bishops’ annual Retirement Fund for Religious collection, to be held in most U.S. parishes Dec. 8-9.

The collection raised $27.4 million in 2011, according to the National Religious Retirement Office, which oversees the collection and funds. Last year, the office distributed $23 million to 453 religious communities. It gave an additional $2.9 million to communities with greater needs and “ongoing education in retirement and elder-care delivery,” according to a Nov. 19 NRRO statement.

Donations from within the Archdiocese of Baltimore totaled $420,613 in 2011, while the NRRO distributed $559,696 within the archdiocese for the care of senior religious.

“It is our sustenance,” Sister Mary Charlotte said of the fund. “If we didn’t have that, I don’t know where we would be. I guess we’d be on bread and water.”

Last year, the distributed funds nationwide averaged $907 per eligible religious, far below the $37,200 average annual cost of care for a “senior religious.” The total cost of care for men and women religious in 2011 exceeded $1.1 billion, according to the NRRO.

“Despite the unparalleled generosity to the collection, religious communities continue to face significant challenges in meeting the high costs of health care,” the NRRO said.

Like Sister Mary Charlotte, many religious men and women past retirement age are not retired at all.

At age 70, Sister Mary Charlotte left her work as a principal of a Catholic school in Washington, D.C., – the last of seven schools in four states and the District of Columbia where she taught or was principal. She moved to the order’s motherhouse in Baltimore, where she previously served as her order’s secretary general and, later, superior general. There she helped run the day-to-day life of the busy motherhouse and worked with homeless women, before going to Nigeria to teach seminarians English in 2003.

After returning to the United States in 2004, she continued to work at St. Gregory, which serves a low-income neighborhood.

Her stipend from parish work goes to her community, which includes many members Sister Mary Charlotte’s age and older, she said. Like many U.S. religious communities, the Oblates have far more elderly sisters than younger sisters, a dramatic demographic shift from decades past.

To compound their financial need, the Oblates also did not begin participating in Social Security until 1972, Sister Mary Charlotte said, meaning decades of potential retirement earnings are not available for older sisters. She estimates the older sisters’ Social Security benefits are a third of what a working lay person might have earned.

To combat the unique retirement challenges facing religious men and women, the NRRO is working with religious communities to develop retirement strategies that will provide for the care of their senior members, it said.