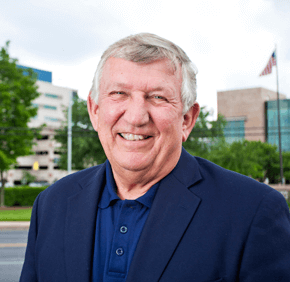 By Elizabeth Lowe
elowe@CatholicReview.org
Twitter: @ReviewLowe
Anne Arundel County State Sen. James DeGrange was educated in a Catholic school decades ago, but the values-based education he received as a youth has stuck with him.
“The values that are instilled in you, whether it’s charity, giving back to the community and the dedication and the quality of education you get, that doesn’t compare with many schools you could attend,” said DeGrange, 63, a parishioner of Holy Trinity in Glen Burnie who attended primary school at Holy Trinity School, which is now Monsignor Slade Catholic School.
“All education is important,” he said, “but I see the values that were instilled upon me. I see the opportunity for many children that can’t afford that type of education and it’s important we address the ones that aren’t as fortunate as some of us are.”
DeGrange received the inaugural “champion of education award” from the Maryland Council for American Private Education (CAPE) May 22 for his work with education.
In addition to supporting public funding for non-religious textbooks and technology in Catholic and other nonpublic schools, DeGrange has been a strong advocate for “Building Opportunities for All Students and Teachers in Maryland” (BOAST), a proposed business tax credit benefitting public and nonpublic schools.
“I have been working on that for eight years,” said DeGrange, a Democrat. “My prime goal is to get that passed. That’s one of those things I was told – never give up. We’re going to continue to do that, along with the support of many others. We need to get a strong champion in the (Maryland) House (of Delegates) to get it passed.”
BOAST would provide tax credits to businesses that donate to scholarship organizations benefitting students in nonpublic schools. Businesses that contribute to enrichment programs for students in public schools would also receive tax credits, and the program would allow nonpublic school teachers to receive grants for professional development.
“He really has been a champion of students in general, students in public school and non-public school,” said Dr. Barbara McGraw Edmondson, superintendent of Catholic Schools for the Archdiocese of Baltimore. “He puts the children first.”
Dr. Mary Ellen Hrutka, executive director of the Mid-Atlantic Catholic Schools Consortium, said DeGrange is a committed Catholic who “steadfastly supports Catholic values in the public square.”
DeGrange, manager of community development and business relationships for the University of Maryland Baltimore Washington Medical Center, said there are many people deserving of recognition for their work on behalf of education.
“I’m happy I was able to help in some small way to see that nonpublic schools are recognized and addressed,” he said, “because it’s about the children and not about any particular individual.”
Advantages of faith-based schools:
According to a study published in the “Peabody Journal of Education,” there are advantages for students enrolled in faith-based schools.
“The results indicate that attending private religious schools is associated with the highest level of academic achievement,” according to the report.
The study was conducted by William Jeynes, senior fellow at the Witherspoon Institute in Princeton, N.J., and a professor at California State University, Long Beach.
According to the study, key findings included that compared to traditional and charter public schools, faith-based schools have a significant academic advantage; narrower achievement gaps by race, ethnicity and income; and better student behavioral outcomes.
For more articles on education click here.
Copyright (c) May 22, 2013 CatholicReview.org
PrevNext