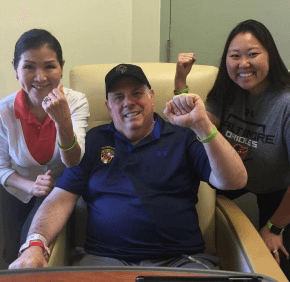 The governor, a parishioner of Holy Family in Davidsonville, recently completed his first round of chemotherapy since being diagnosed with an aggressive form of cancer of the lymph nodes. On his Facebook page, the governor reported July 2 that he has returned to Annapolis. He has been working while undergoing treatment, he said.

On his fifth and final day of his first round of 24-hour chemotherapy July 1, Hogan posted a photo of himself with family members. He wore a green bracelet showing support for those battling lymphoma.

“Thank you for all your prayers and well wishes and helping me stay #HoganStrong! ,” the governor wrote.

When the Republican governor announced his cancer diagnosis June 22, Archbishop William E. Lori called for prayers for Hogan, asking the “God of Mercy” to “protect and heal him and to bring comfort and strength to the entire Hogan family at this difficult time.”

St. Mary is located at 109 Duke of Gloucester Street, within walking distance of the governor’s residence and the State House.