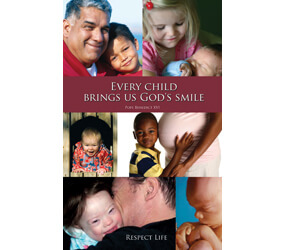 Virginia E. “Ginny” Dauses, the campus minister at St. Mary’s High School in Annapolis, will receive the Culture of Life Medal of Honor Oct. 4 at the Cathedral of Mary Our Queen in Homeland, where Cardinal William H. Keeler, archbishop emeritus of the Archdiocese of Baltimore, will celebrate the Respect Life Mass at 11 a.m.

Dauses is being acknowledged for her efforts in mobilizing the youth of the high school, her home parish of St. Mary’s and all of the archdiocese.

According to the archdiocesan Respect Life office, 15 young people from St. Mary’s attended the annual March for Life in Washington D.C. when Dauses began her youth ministry at the high school. For the 2009 March for Life last January, the school sent four busses, representing half of its student population.

Dauses was the master of ceremonies at the national event from 2001 to 2004, and organized the St. Mary’s effort when it served as host of the 2009 Maryland March for Life.

In keeping with her commitment, students representing Catholic high schools are invited to take part in the opening procession at the Respect Life Sunday Mass.

This year’s Respect Life theme of the U.S. Conference of Catholic Bishops is “Every Child Brings Us God’s Smile.”

To mark Respect Life Sunday Oct. 4, several Life Chains, which involve peaceful and prayerful witness for an end to abortion, will be conducted in the archdiocese, most at 2:30 p.m. The efforts usually last an hour.

Immaculate Heart of Mary in Baynesville has invited students from the Newman Center at Towson University to participate in its Life Chain, which will be conducted on the sidewalk in front of the church on Loch Raven Boulevard. For more information, telephone 410-665-8645.