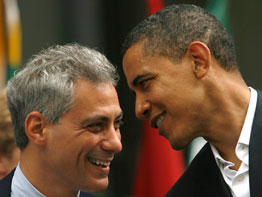 While the feelings of hope may be based more on the color of his skin, his middle name – Hussein – and the fact that he was raised partly in Indonesia, which has the world’s largest Muslim population, Arabs were jubilant at Sen. Obama’s election, painting him as someone with whom a dialogue of equals is possible.

“There is an impression that the attitude not only to the Middle East but to the world in general will be one of change from the use of force to dialogue,” said Hanna Siniora, a Catholic Palestinian political analyst and co-director of the Israel/Palestine Center for Research and Information in Jerusalem. “In the Arab world people are very happy there is a change in the administration, and we feel there will be a person in the White House who will probably look fairly at the Middle East and at the Israeli-Palestinian problem.”

One 21-year-old blogger from Bahrain called Sen. Obama’s election a victory for the world and a “win for civil rights and justice.”

“I haven’t said this in a really long time, but I am loving America right now,” she wrote. “Hope is what I have right now, for America and the Middle East. We can do it, and this time, we can be sure that we can do it together.”

In Jerusalem, Maher Turjman, director of the Pontifical Mission for Palestine office, said more than anything the Sen. Obama election had brought a temporary sense of optimism among Palestinians with his message of the value of diversity and possibilities.

“Palestinians are desperate for a change,” said Turjman.

Sen. Obama’s election also presented a different image of the often-despised U.S. as a country, said Catholic sociologist Bernard Sabella, a member of the Palestinian parliament.

“Sen. Obama … could change the image of the United States abroad,” said Sabella.

However, the challenges awaiting Sen. Obama after the elation subsides are great and the expectations high, said Wadie Abunasser, Catholic director of the Haifa-based International Center for Consultations in Israel. More than anything else, said Mr. Abunasser, Sen. Obama is viewed as a welcome change to the highly disliked Bush administration, which Arabs believed was biased toward Israel and too prone to using its military might when it sought solutions to regional problems.

After his inauguration Jan. 20, Sen. Obama will face foreign policy challenges in almost every country in the Middle East, ranging from nuclear disarmament issues in Iran to the withdrawal of U.S. troops from Iraq to negotiations for an end to the six-decade Israeli-Palestinian conflict.

Though Sen. Obama promised reinvigorated efforts for an Israeli-Palestinian peace settlement, analysts said it is highly unlikely it will be high on his agenda.

“There are no high expectations that Sen. Obama will put the Arab-Israeli conflict as a top priority,” said Sabella. “He will most likely put the economic crisis and other internal issues on the top of the agenda. But we Arabs get the impression that Sen. Obama leans more toward finding the path of negotiations to solving problems without resorting to military measures.”

In general, said Abunasser, Palestinians are more hopeful about regional issues than they are about the Palestinian issue, which they fear is more than likely to be put on the back burner, at least for the next six months.

Throughout his election campaign Sen. Obama expressed willingness for dialogue even with countries seen as hostile to the U.S., such as Syria and Iran, and promised to withdraw American troops from Iraq by mid-2010. Sen. Obama was opposed to the war at its outbreak in 2003.

Jordan and Syria, which have been struggling to deal with the issue of the hundreds of thousands of Iraqi refugees who fled to their countries in the wake of the war, welcomed Sen. Obama’s promise to end the war as a means to end the humanitarian crises in their countries.

Sen. Obama will now be held to his promises, said Abunasser.

“The most pressing of the challenges he faces are the Iraq and Iran issues, which are very interlinked,” he said. “Iran is playing a very major role in Iraq now. Any settlement with Iran will include a decision about what role the U.S. will allow Iran to play in Iraq.”

Iraqi Foreign Minister Hoshyar Zebari welcomed the election of Sen. Obama and said he did not expect an immediate change in U.S. policy toward Iraq, according to press reports.

“There won’t be quick disengagement here. A great deal is at stake,” Mr. Zebari said.