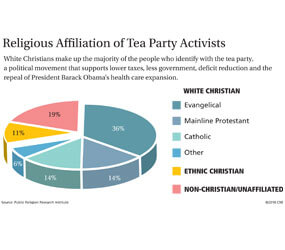 WASHINGTON – More than half of the people supporting the tea party movement identify themselves as Christian conservatives, with beliefs on issues such as abortion and same-sex marriage that are at odds with the movement’s libertarian, no-government-intrusion image, according to a new survey.

About 11 percent of Americans identify with the tea party movement, and most of its supporters beliefs’ reflect Republican Party principles, the survey also said.

As part of its biennial American Values Survey, the Public Religion Research Institute asked questions intended to try to define the attributes of people who see themselves as part of the tea party, a political movement that espouses reduced government, lower taxes and a strong emphasis on the Constitution.

The data comes amid much media coverage of the movement as tens of thousands of people have participated in rallies under the tea party umbrella around the country since the 2008 election. Though the tea party is not a formal political party and lacks a central organization, candidates associated with it have won primaries in several congressional races.

But unlike a general impression the movement is libertarian, most of the people who consider themselves part of it “are largely Republican partisans,” said the study’s authors in the report, “Religion and the Tea Party in the 2010 Election,” released at a forum in Washington Oct. 5.

“The survey findings challenge, more than confirm, the conventional wisdom about the tea party movement,” said the report by researchers Robert Jones and Daniel Cox.

A breakdown of religious affiliation showed white evangelicals made up the largest religious segment of the movement, at 36 percent, followed by white mainline Christians and white Catholics, 14 percent each. About 4 percent are Latino Catholics, and 15 percent are unaffiliated with a faith group. The remainder is divided among other Christian classifications.

At the forum, hosted by the Brookings Institution, the Rev. Susan Brooks Thistlethwaite, a professor of theology at Chicago Theological Seminary and a United Church of Christ minister, said the data bears further investigation, particularly into the religious philosophies of the other 43 percent of the tea party followers who do not consider themselves part of the conservative Christian movement.

She also questioned the connection or disconnect between evangelicals and the tea party’s libertarian emphasis. Noting the strong involvement of evangelical churches in domestic and foreign aid projects, she pointed to what appear to be “some very differently held values. Caring for the ‘least of these’ is an evangelical value that seems less important to a tea party member, whether he or she identifies with conservatism or libertarianism.”

Unlike a perception given by the amount of media coverage of the movement’s activities, the survey found that it represents perhaps 11 percent of the adult population. This is about half the size of the conservative Christian movement, which make up about 22 percent of the population.

Discussion moderator E.J. Dionne, a senior fellow at Brookings and syndicated columnist for The Washington Post, described the tea party as “a rather small group that’s had attention far beyond its numbers.”

“When you’ve got your own network 24 hours a day – I’m referring to Fox – that makes a big difference,” Dionne said, noting that two tea party icons, former Alaska Gov. Sarah Palin, who was the 2008 Republican nominee for vice president, and talk show host Glenn Beck, are both on Fox programs.

“I think that the media, the mainstream media, let Fox set the agenda a bit more than they should,” Dionne said.

“Americans who identify with the tea party movement are mostly social conservatives, not libertarians on social issues,” it said. Nearly two-thirds, 63 percent, say abortion should be illegal in all or most cases and only 18 percent support allowing same-sex marriage, for example.

Rev. Thistlethwaite, a senior fellow at the Center for American Progress, said she spent time this past summer at tea party events in Chicago and came away with impressions of the group she said were borne out by the research. But she picked up on an undercurrent of concern about the “shifting racial landscape” in the country that bears further study, she said.

Signs at such events depicting President Barack Obama with a Hitler-like mustache, for example, seem to have become “20th-century code for ‘really, really bad and frightening,’“ she said, adding that she thinks “this is an attempt to redefine whiteness as victimization and to see whiteness as the object of racial discrimination.”

Panelist Michael Gerson, a Washington Post writer and former speech writer and policy adviser to President George W. Bush, noted that while 11 percent is a small portion of the U.S. population, the tea party movement represents a substantial part of the Republican Party and as such is quite important.

He said one way to view the rise of the tea party is as a new expression of the nation’s culture wars.

“There is a tendency in American Christianity to absorb or adopt the ideological agendas of others,” he said. “We’ve seen that on the religious right, the religious left. I fear it with the tea party. I find (this in) elements of the tea party ideology, particularly on a constitutionalism that amounts to an extreme libertarianism (and in) its attitudes on immigration, which I think are deeply problematic (and) a kind of extreme anti-government rhetoric.”

Such positions are “not productive to dialogue,” he said, and will create problems for whoever is trying to govern while trying to keep constituents with such demands happy.