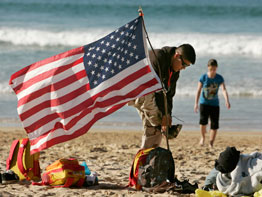 Young people lined up for Internet access and coffee, but they also crowded around each booth, picking up information and stepping aside for serious conversations with the religious and priests.

A step away from the U.S. bishops’ conference booth July 16, a young man from Wisconsin who is in the final stages of discerning his vocation offered practical advice to a young man just starting his search.

“Talk to your vocations director,” he said. The process “looks overwhelming, but it is not.”

The bishops’ booth offered young people a chance to write a note about their favorite priests. Snippets from the notes pinned to the wall included praise for priests who are supportive, who reverently celebrate Mass, a priest who “really gets the point of believing in Jesus,” and priests who are “devoted to serving the poor.”

Missionaries of Charity Sister Milada, originally from the Czech Republic, said: “Without reflection and prayer a vocations expo is nothing. But it is effective in the context of World Youth Day with its prayer, the witness of young religious, the catechesis and the testimonies.

“We have been really busy,” said the sister, who does not use her last name.

Saria Blenkinsopp, 21, lives in Sydney. She said the vocations fair was “awesome. I’m going out with someone and I think I will marry him,” but the booths gave her an opportunity to see the variety of religious orders and to meet religious who were not much older than she is.

“We can easily miss out on a call if we don’t have any contact with priests and nuns,” she said. “The sisters that wear habits are a walking sign. They make people stop and think.

“I don’t want to knock back those who don’t wear habits – it’s important to have both. It depends on the charism of their community and the work they are doing,” she said. “But how can young girls think of becoming a nun when they never see one?”

“Lately there has been a lot of emphasis on Christian marriage and the theology of the body, so I don’t think the vocations fair takes away from that,” Blenkinsopp added. “God calls us in different ways.”

Joe Dziok, 16, of Chicopee, Mass., said, “I think it’s nice to see how many young people seem interested” in the religious orders.

Asked if he was considering a vocation to religious life, he said: “I don’t know. I’m too young to decide right now. If anything, I think I’d be a Franciscan,” like the priests who staff his home parish, St. Stanislaus.

Joe said he did not think any pressure was being put on the young people, but “especially with this World Youth Day (concentrated) on the Holy Spirit, we are focused on the Spirit’s influence in our lives. At the catechesis this morning someone said that when you open your mind to the Holy Spirit, your ideas about life can change.”

At World Youth Day, he said, “young people are taking their faith seriously” and looking at vocations is part of that.

St. Paul de Chartres Sister Marietta Thieu said the vocations fair, like World Youth Day itself, was an “amazing, wonderful” sign of how God unites people while respecting their diversity.

“All these orders, all these booths, but we have one aim: to find God. And everyone is happy,” the sister from Vietnam said. “Only God can unite people like this.”